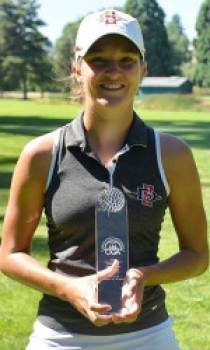 Krause sank six birdies during the final round, including four on the front nine to win by six strokes over Hannah Swanson (+3), who claimed the event title in 2016, while Victoria Gailey (+4) followed closely in third on the par-72, 5,942-yard layout.

In all, Krause drained nine birdies for the week against six bogeys en route to the second Oregon Golf Association championship of her career after winning the Oregon Junior Stroke Play crown in 2012.

At SDSU Krause has totaled four top-20 finishes during her collegiate career, including an individual victory at the CSUSM Cougar Invitational in the spring of 2016.  The recreation and tourism major competed in nine tournament as a junior last year, posting a 75.52 scoring average. She was also the Aztecs’ No. 3 golfer at the Mountain West Championship, finishing with a season-best standing of 11th at 5-over 221.

In October of 2014, Krause recorded the second-lowest 18-hole score in program history, firing a 7-under 65 during the opening round of the Las Vegas Collegiate Showdown.