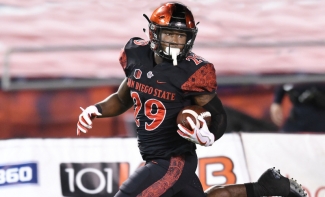 October 2, 2017 (San Diego) - San Diego State’s Juwan Washington has been named the Mountain West Special Teams Player of the Week, the league announced Monday. It is the first career weekly award for the sophomore.

SDSU became the first team in league history to win a MW player-of-the-week award each of the first five weeks of a season.

The Aztecs have now won eight of the 15 weekly awards doled out by the league, including five by Rashaad Penny (Norwalk, Calif.) (four offensive, one special teams), and one apiece by Noble Hall (defensive), Kameron Kelly (defensive) and Washington (special teams).

Washington helped SDSU to a 34-28 win over Northern Illinois on Saturday night by taking the opening kickoff 96 yards for a touchdown. It was his second career kick return for a score, second overall touchdown this year and 10th overall score for his career. He also added 19 rushing yards on four attempts (4.8 avg.), totaling 115 all-purpose yards on five touches (23.0 avg. per touch).

San Diego State, which leads the nation in kick return average (39.13), is the only school in FBS play this season with a kick return touchdown from two different players (also Penny).