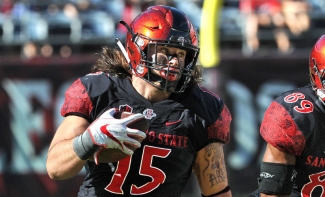 Detroit Lions select Aztec FB in the seventh round

April 28, 2018 (Arlington, Texas) - San Diego State fullback Nick Bawden, who logged the second most snaps nationally at fullback in 2017, was selected by the Detroit Lions in the seventh round of the 2018 NFL Draft.

Bawden becomes the second San Diego State running back selected in this NFL Draft, following Rashaad Penny, who was taken with the 27th overall pick on Friday.

Last season, Bawden caught 15 passes for 103 yards (6.9 avg.) and a touchdown, while serving as the lead blocker at fullback for Penny, the consensus All-American running back. According to Pro Football Focus, he was the highest-graded fullback blocker in 2016 and the third best last year, despite playing the majority of the season with a club on in hand. His 560 snaps last year were the second most in FBS at fullback, despite missing the UNLV game with an injury.

Bawden started his San Diego State career as a quarterback and even started two games of his true freshman season at the position before transitioning to fullback.

“At first I really didn’t believe that I could do it, but I wanted to stay in San Diego,” Bawden said. “I loved our coaches. I loved everything that we were going toward, so I was willing to give it a chance. That definitely gave me an opportunity to be where I am today, talking to you as a Detroit Lion, which I am so excited about. It’s an incredible opportunity.”

Over his career, Bawden played in 39 games with 25 starts (23 at fullback, two at quarterback). He finished his career with 30 catches for 240 yards (8.0 avg.) and a touchdown, while rushing 12 times for 47 yards (3.9 avg.). In 2016, Bawden was a first-team All-American by Pro Football Focus, grading out as the best blocking fullback in the country and the sixth-best fullback overall.

In his two years as the starting fullback at San Diego State leading the way for a pair of players that finished in the top 10 of Heisman Trophy voting (Penny and NCAA all-time leading rusher Donnel Pumphrey), Bawden helped the Aztecs accumulate 6,962 rushing yards and 67 rushing touchdowns. During that span, the Aztecs ranked eighth nationally in rushing yards per game (257.9) and fifth in yards per rush (5.7).  Since 2016, SDSU averaged an eye-popping 5.4 yards per rush in 51 third down and short situations (needing two yards or less).

Bawden becomes the first Aztec selected by the Detroit Lions since wide receiver Robert Claiborne was a 12th-round pick in 1990.

With the Detroit Lions seventh-round selection today, San Diego State head coach Rocky Long has now had 27 players selected during his tenure as a FBS head coach. That is the most selections any active FBS head coach has accumulated while serving as the head coach at a Group of 5 School.