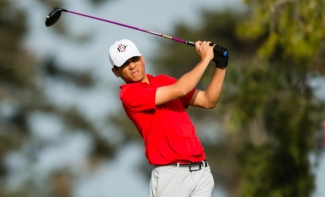 For the seventh time in 11 events this season, Samiere was SDSU’s No. 1 golfer, tying for sixth out of 95 players with a combined 6-under-par 204 on rounds of 73-63-68, helping the Aztecs to a third-place tie in the team standings. SDSU was the lone school from a non-Power 5 school to finish among the top seven.

During the second round at the scenic par-70, 6,615-yard Pasatiempo Golf Course, Samiere shot a collegiate-low 7-under 63 to tie a tournament record, highlighted by seven birdies over an eight-hole stretch. Among his drains were back-to-back conversions on the 10th and 11th greens, which ranked as the second and third-most difficult holes of the weekend, respectively.

In addition, Samiere tied for the third-lowest 18-hole card in school history and marked his second-best score in relation to par as a collegian.

Not to be outdone, Samiere tied for the tournament lead in par-4 scoring (3.87) and topped 10 individuals in the field ranked among the Golfstat top 100, including such notables as No. 43 Scottie Scheffler of Texas, No. 50 Brandon Wu of Stanford and No. 66 Ryan Gronlund of Oregon.

With his effort, Samiere netted his fifth top-10 placement of the season and 11th of his career. The reigning California State Amateur Champion leads the Scarlet and Black with a 71.09 scoring average, which ranks fourth in the Mountain West, and has completed a team-leading 13 rounds below 70.

In addition, Samiere has climbed into the 81st spot in the latest Golfstat individual rankings.

Samiere and the Aztecs return to the fairways for the Mountain West Championship, slated for April 20-22 at Gold Mountain Golf Club in Bremerton, Wash.