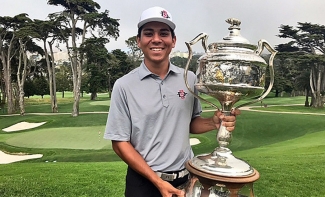 Samiere tied for 15th after two rounds of stroke play at the 106th annual event with a collective 1-over-par 143 before reeling off five consecutive victories in head-to-head competition en route to the title.

With his victory, Samiere joined such notables as Johnny Miller (1968), Bobby Clampett (1978, 1980), Mark O'Meara (1979), Duffy Waldorf (1984) and Charlie Wi (1990) to have their names inscribed on the Edward B. Tufts Trophy. In addition, the Aztec rising senior becomes the second SDSU player to win the California State Amateur in the last four years, along with Xander Schauffle, who accomplished the feat in 2014.

Samiere got off to a strong start during the first round of match play last Wednesday, defeating Oregon junior-in-waiting Ryan Gronlund (Pleasanton, Calif.), 3&2, after building a sizeable 4-up advantage through the first 11 holes. The Punahou High School product maintained the momentum in the round of 16 on Thursday, dispatching Cal State San Marcos rising junior Jake Williams (Temecula, Calif.) by a similar 4&2 count.

As match play entered its third day, Samiere found himself in a tighter battle with Stanford product Franklin Huang (Poway, Calif.) before emerging triumphant in a 19-hole thriller. Samiere was 2-down with three holes remaining, but sank birdies on 16th and 18th greens, while his adversary went par-par-par during that stretch. The two golfers returned to the par-4, 449-yard No. 9, where Samiere made par to advance in the bracket, while Huang notched a bogey.

That set up a semifinal showdown with the University of San Francisco rising senior Henry Chung (Cerritos, Calif.), as Samiere posted a convincing 4&3 victory, jumping in front to stay after recording a birdie on the par-3 200-yard No. 8.

In Saturday's finale, Samiere, who garnered all-Mountain West accolades for the Aztecs in 2016-17, was pitted against Norton, a freshman-to-be this fall at Georgia Tech. Samiere was staring down the barrel of a five-hole deficit after his counterpart registered a birdie on the par-4, 430-yard 11th, but methodically fought himself off the ropes with three drains of his own at No. 12, No. 17 and No. 18.

Samiere soon knotted the score after winning the first two holes of the afternoon session, as the match evolved into a see-saw affair. Samiere found himself clinging to a 1-up advantage on holes 28-30, but Norton drew even No. 31.

The two players halved the ensuing four holes before Samiere came through with a birdie at No. 36, the par-4, 347-yard 18th to complete the dramatic comeback.

During the 2016-17 campaign, Samiere helped San Diego State to its school-record 19th consecutive NCAA regional appearance after leading the team with a 72.11 scoring average and 19 rounds at or below par. For his efforts, he earned a spot on the PING Division I All-West Region team for the first time as a collegian.

Last fall, Samiere recorded a pair of runner-up placements at the William H. Tucker Intercollegiate and the Saint Mary’s Invitational, lifting the Aztecs to a pair of team titles. Additionally, he tied for SDSU’s fourth-best 18-hole score in program history after firing a collegiate-low 64 in the opening round of the Alister MacKenzie Invitational in October.