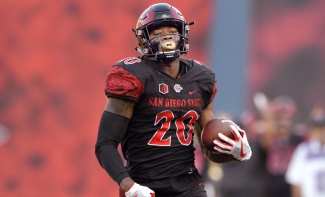 September 4, 2017 (San Diego) - San Diego State running back Rashaad Penny (Norwalk, Calif.) has been named the Mountain West Offensive Player of the Week, the league announced Monday. It is the first career league offensive award for the senior, who has twice previously selected as the MW Special Teams Player of the Week.

Penny ran for 197 yards and two touchdowns on a career-high 21 carries in just three quarters to lead the Aztecs to a 38-17 victory over UC Davis in the 2017 opener Saturday night at San Diego Stadium. The 197 yards were the fifth most in FBS this season, just 11 yards shy of a career high and the third most in a SDSU season opener in its Division I history (since 1969).

Penny, who also added an 18-yard kick return to finish with 215 all-purpose yards, gave San Diego State a 10-0 lead in the first quarter with a 61-yard touchdown run. He later added a 9-yard TD late in the second in what proved to be the game-winning score, putting the Aztecs up, 24-3, at the half.

Penny now has six career 100-yard rushing games (all over the last 11 contests), which ranks in a tie for the 15th most in SDSU history. He scored multiple rushing touchdowns for the fourth time (all over the last nine games), and now has 17 career rushing touchdowns and 26 overall scores. Penny, who has 22 touchdowns (16 rushing, three receiving and three kick return) over San Diego State’s last 19 games, is 18th on the school’s all-time rushing list with 1,605 yards.