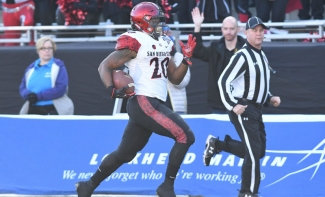 Seahawks take Penny with 27th pick of first round

April 26, 2018 (Arlington, Texas) - San Diego State running back Rashaad Penny was selected in the first round of the 2018 National Football League Draft on Thursday night by the Seattle Seahawks. Penny, who finished fifth in the Heisman Trophy voting in his final season in 2017, is SDSU’s first player taken in the first round of the NFL Draft since Kyle Turley in 1998 and ninth first-round pick in program history.

For his efforts, Penny racked up numerous postseason accolades, highlighted by the fifth-place finish in Heisman Trophy voting. Penny was also a Walter Camp Player-of-the-Year finalist, Maxwell Award semifinalist (college player of the year) and Doak Walker Award semifinalist (nation’s premier running back), and a consensus first-team All-American, SDSU’s third in program history (Faulk in 1992 and 1993, and Turley in 1997). Penny was also named a first-team All-American by Associated Press, FWAA, The Sporting News, Sports Illustrated, ESPN, USA Today, CBS Sports, All-American and Bleacher Report.  Additionally, Penny was named the Mountain West Offensive Player of the Year and the MW Special Teams Player of the Year, the first in league history to win two player-of-the-year awards.

Penny finished his career with five straight games with at least 200 yards rushing, tying an NCAA FBS record with USC’s Marcus Allen (1981), Oklahoma State’s Barry Sanders (1988) and North Texas’ Jamario Thomas (2014). He had nine MW player-of-the-week awards for his career, including seven in 2017 in 12 weeks (five-time offensive player of the week, two-time special teams player of the week (he was also a MW Special Teams Player-of-the-Week winner once in 2015 and once in 2016) and played in all 54 games since he arrived on campus in 2014.