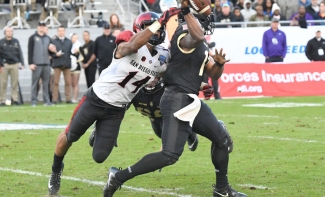 Thompson, a Warrior (safety) in Rocky Long’s 3-3-5 defense, started all 13 games this year for SDSU, registering 63 tackles (46 solo), five interceptions for 83 yards and a touchdown, four pass breakups, three tackles for loss, a forced fumble, a fumble recovery and three quarterback hurries. Thompson tied for the Mountain West lead and tied for 15th nationally in interceptions per game (0.38), and is the only freshman in the country this year with multiple interceptions in multiple games.

Thompson’s 63 tackles matched Trey Lomax (2014) as the most by a San Diego State freshman in the Rocky Long defensive coordinator era (since 2009). He was also named a second-team all-MW performer.