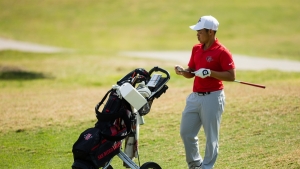 November 6, 2018 (Pebble Beach) - The San Diego State men’s golf team vaulted into seventh place at the Saint Mary’s Invitational on Tuesday after firing a collective 7-under-par 277 during the second round at the famed Poppy Hills Golf Course.

The Aztecs shaved 21 strokes off their combined score from the opening round to climb six places in the standings with a 36-hole total of 7-over 575 heading into Wednesday final round on the par-71, 6,945-yard track.

With its inspired play, SDSU also remains eight shots behind fifth-place Oregon (-1), while Mountain West rival Colorado State occupies the sixth position out of 18 schools in the 13th annual event. Front-runner Brigham Young (-19) maintained its lofty perch after the second round, while Pepperdine (-5) finds itself running second just ahead of Arizona (-3) and USC (-2).

Fueling the Aztecs’ resurgence was Leo Oyo (Tokyo, Japan), who catapulted 42 places on the individual leaderboard into a tie for fourth after shooting a career-best 65. The SDSU freshman offset two bogeys with four birdies as well as two eagles on the par-5, 572-yard No. 13 and the par-5, 535 No. 18. Among his birdie conversions was a successful drain on the par-4, 421-yard No. 3, which ranks as the toughest hole of the tournament thus far.

As a result, Oyo, who moved into a tie for 10th on the school’s all-time charts for lowest 18-hole score, sits two strokes behind second-place Craig Ronne of Oregon (-5) and one shot in back of Brigham Young’s Austin Banz (-4), sharing the fourth position along with Utah’s Kyler Dunkle, Fresno State’s Alex Lee and Pepperdine’s Joshua McCarthy. BYU’s Peter Kuest (-12), who carded a tournament record 61 on Monday, kept a firm grip on the top spot after logging a 69.

The rest of the Aztec lineup also gained ground on the leaders Monday, including freshman Puwit Anupansuebsai (Nakhon Phanom, Thailand) and junior Aaron Whalen (Ephrata, Wash.), who each recorded a second-round 70.

Anupansuebsai was sparked by an eagle on the first hole, a par-5, 527-yarder, followed by a collection of birdies on the second, fifth, ninth and 18th greens to climb 17 places into a tie for 29th at 2-over 144. However, three bogeys on the back nine, coupled with a double on the par-5 13th, prevented a steeper ascent.

Whalen overcame two early bogeys by sinking five of his six birdies over a nine-hole span through the turn, punctuated by back-to-back makes on the 12th and 13th greens. The Washington State transfer hit a snag on pair of par-4s with a double-bogey at No. 14 and a bogey at No. 17 before finishing with another birdie at No. 18. Despite the hiccups, Whalen still made a substantial gain, jumping 27 places into a tie for 42nd at 4-over 146.

Freshman Youssef Guezzale (San Diego, Calif.) also moved up four spots into the 42nd position, thanks to a second-round 72. The La Jolla High product was plagued by three bogeys on the front nine, but recorded just one blemish the rest of the way after making birdie on the par-5, 515-yard No. 9. The Aztec also recorded conversions on the 14th and 18th greens, with the former ranking as the sixth-most difficult hole of the week.

Elsewhere, Zihao Jin (Beijing, China) finds himself in a tie for 68th at 9-over 151 following a 75 on Tuesday. The Aztec freshman matched Guezzale with birdies at No. 9 and No. 18 after opening with a drain on No. 1. The SDSU sophomore was just 1-over for the round following his third straight par on the 14th green, but back-to-back double-bogeya at No. 15 and No. 16 derailed any hopes for a sizeable advance in the field.

The Aztec contingent also featured sophomore Steve Sugimoto (San Diego, Calif.), an unattached golfer who remains tied for 29th at 2-over 144 after turning in his second straight card of 72. The Rancho Bernardo High alumnus countered two bogeys with a trio of birdies, but was unable to avoid a slip of two places thanks to a double-bogey on the par-3 11th.

The Saint Mary’s Invitational concludes on Wednesday with San Diego State teeing off alongside the host Gaels, starting at 8:04 a.m. on hole No. 10.