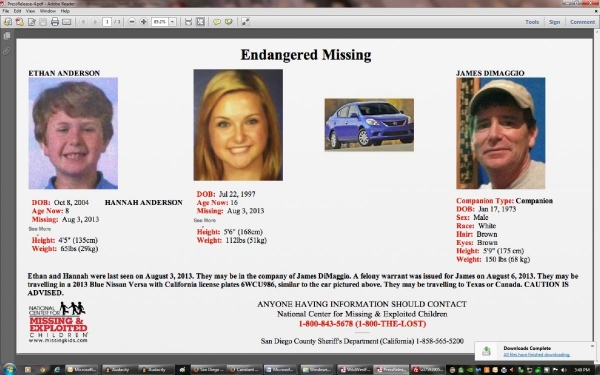 August 8, 2013 (Lakeside) The Amber Alert for Hannah Anderson, 16, and her brother, Ethan, 8, has now extended to Mexico. According to El Diario, a Mexican newspaper, “The FBI is working with the San Diego Sheriff’s Department, and Mexican authorities since Monday.”http://diario.mx/Estados_Unidos/2013-08-08_1b800648/emiten-alerta-amber-en-san-diego-buscan-al-sospechoso-en-mexico

Other developments have led to the extension of the Amber Alert to Nevada, Oregon, Washington and Canada.

The Nuevo Herald Of Ciudad Juarez added that the FBI is working with Mexican Authorities since this is a “common flight route to this type of criminal.”   http://www.elnuevoherald.com/2013/08/08/1540190/cuatro-estados-en-alerta-por-secuestro.html

The San Diego Sheriff warns that murder/kidnapping suspect James DiMaggio might have left his home in Boulevard with explosives.

Sheriff’s representative Jan Caldwell told 10News, "If you see this car, don't go close to it. There is a possibility he may have rigged it … Memorize the car, memorize the license plate, the faces, and then don't do anything; don't approach them, call 911." http://www.10news.com/news/san-diego-county-sheriffs-dept-says-james-dimaggio-may-be-armed-with-explosives-080813

There is also a possibility, as reported by the Los Angeles Times, that James DiMaggio might have switched vehicles by now.

The vehicle is a Blue Nissan Versa, 2013 model, with California Plates 6WCU986.

A sighting on a freeway camera was spotted in the Santa Ana area. Unconfirmed sightings have been claimed in northern California and Oregon.

The children have not been seen since the bodies of their mother, Christina “Tina” Anderson and an unidentified child were found in DiMaggio’s burned home in Boulevard. Authorities have determined that Christina Anderson was murdered.  The child’s body has not been identified pending DNA but is consistent with an 8-year-old child, leading to fears that the dead child could be Ethan.

Hannah is about 5-foot-7 and 115 pounds, with blond hair, blue eyes, a navel ring, a nose stud and pierced ears. Ethan was described as about 4 feet 11 inches and 65 pounds, with sandy blond hair.

DiMaggio was a long-time friend of the family.  Missing Persons of America reports that Hannah posted photos on her Facebook page indicating she was recently in Hollywood with DiMaggio; it is unclear whether other family members or friends were also along on the trip. http://www.missingpersonsofamerica.com/2013/08/hannah-anderson-amber-alert-for-two.html

DiMaggio’s Facebook page indicates that he is a member of just one group, a leukemia support group located overseas.  https://www.facebook.com/jim.dimaggio.7?fref=ts

CBS reported that Hannah told a friend DiMaggio claimed to have a “crush” on her and that she had avoided being along with him after that. http://www.cbsnews.com/8301-504083_162-57597467-504083/james-dimaggio-manhunt-suspected-calif-abductor-had-crush-on-girl-friend-says/

Cryptic final posts on the Facebook page listed for Jim DiMaggio with Scripps Research Institute, his employer,  indicate he may have been planning to start a new life elsewhere.

“The tragedy of life is not that it ends too soon, but that we wait so long to begin it,” one quote by W.M. Lewis on DiMaggio’s Facebook page read, posted on July 10 with a notation “near Boulevard.”

Another quote from Apple founder Steve Jobs advises that “Your time is limited…have the courage to follow your own heart and intuition.”

However a different Facebook page set up after the disappearance of the children  purports to suggest the two ran off together. This has been identified as a hoax, a Redding newspaper reports, citing the San Diego Sheriff as the source: http://www.redding.com/news/2013/aug/08/facebook-post-alleged-kidnapper-dimaggio/

A “Praying for Hannah” page on Facebook has also been set up by friends and family at https://www.facebook.com/prayingforhannah?fref=ts

Anyone with information on the possible whereabouts of the suspect or the missing children was asked to immediately call the San Diego County Sheriff's Department at 858-565-5200. They have also been urged to call 911.

A flyer for the missing children is available at http://www.missingkids.com/missingkids/servlet/PubCaseSearchServlet?act=viewChildDetail&LanguageCountry=en_US&searchLang=en_US&caseLang=en_US&orgPrefix=NCMC&caseNum=1220640&seqNum=2 .