“All individuals, regardless of their rank or position, will be held accountable for perpetuating half-truths or misrepresentations about matters materially important to the interest of our country's investors." -- Robert Khuzami, Director, SEC Enforcement Division 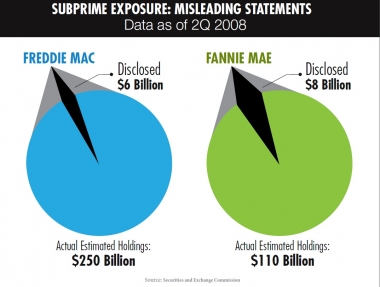 The SEC alleges that executives knew and approved of misleading statements claiming the companies had only minimal holdings of high-risk mortgage loans, including subprime loans.  The SEC seeks financial penalties, return of "ill gotten gains" and permanent injunctive relief against the executives.

"Fannie Mae and Freddie Mac executives told the world that their subprime exposure was substantially smaller than it really was," said Robert Khuzami, Director of the SEC's Enforcement Division.

He added, "These material misstatements occurred during a time of acute investor interest in financial institutions' exposure to subprime loans, and misled the market about the amount of risk on the company's books. All individuals, regardless of their rank or position, will be held accountable for perpetuating half-truths or misrepresentations about matters materially important to the interest of our country's investors."

Fannie Mae and Freddie Mac each entered into a Non-Prosecution Agreement with the Commission in which each company agreed to accept responsibility for its conduct and not dispute, contest, or contradict the contents of an agreed-upon Statement of Facts without admitting nor denying liability. Each also agreed to cooperate with the Commission's litigation against the former executives.

“In entering into these Agreements, the Commission considered the unique circumstances presented by the companies' current status, including the financial support provided to the companies by the U.S. Treasury, the role of the Federal Housing Finance Agency as conservator of each company, and the costs that may be imposed on U.S. taxpayers,” a press release issued by the SEC stated.

The SEC is seeking financial penalties, disgorgement of ill-gotten gains with interest, permanent injunctive relief and officer and director bars against the six former executives.

The SEC's complaint against the former Fannie Mae executives alleges that, when Fannie Mae began reporting its exposure to subprime loans in 2007, it broadly described the loans as those "made to borrowers with weaker credit histories," and then reported — with the knowledge, support, and approval of Mudd, Dallavecchia, and Lund — less than one-tenth of its loans that met that description. Fannie Mae reported that its 2006 year-end Single Family exposure to subprime loans was just 0.2 percent, or approximately $4.8 billion, of its Single Family loan portfolio. Investors were not told that in calculating the Company's reported exposure to subprime loans, Fannie Mae did not include loan products specifically targeted by Fannie Mae towards borrowers with weaker credit histories, including more than $43 billion of Expanded Approval, or "EA" loans.

The misleading disclosures were made as Fannie Mae's executives were seeking to increase the Company's market share through increased purchases of subprime and Alt-A loans, and gave false comfort to investors about the extent of Fannie Mae's exposure to high-risk loans, the SEC alleged.

In the complaint against the former Freddie Mac executives, the SEC alleged that they and Freddie Mac led investors to believe that the firm used a broad definition of subprime loans and was disclosing all of its Single-Family subprime loan exposure. Syron and Cook reinforced the misleading perception when they each publicly proclaimed that the Single Family business had "basically no subprime exposure." Unbeknown to investors, as of December 31, 2006, Freddie Mac's Single Family business was exposed to approximately $141 billion of loans internally referred to as "subprime" or "subprime like," accounting for 10 percent of the portfolio, and grew to approximately $244 billion, or 14 percent of the portfolio, as of June 30, 2008.