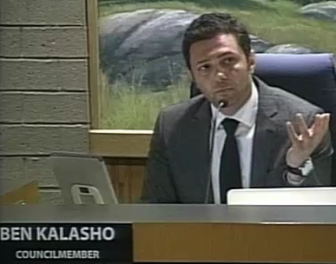 August 4, 2017 (El Cajon) –The San Diego Reader reports that a second contestant in the 2016 Miss Middle East Pageant has filed a lawsuit against Ben Kalasho and the pageant that he runs.  Paris Kargar told the Reader that on the eve of the pageant, Kalasho, an El Cajon Councilman, pulled her aside and told her, “You stay here at the hotel tonight with me, and you win.”

Kalasho did not respond to our email requesting comment for this story, nor to the reader’s inquiry.

Kargar contends that Kalasho put the moves on her repeatedly, making her feel uncomfortable.  She says he earlier asked to meet with pageant contestants one-on-one. In her first meeting with him, she found herself in a dark room.  “Before he turned on the camera, he circled me and asked if I had a boyfriend,” she said, adding that Kalasho whispered that she was “so hot.”

When her turn to walk onstage came, Kalasho commented that her breasts were jiggling too much, Kargar said, adding, “I was embarrassed and ashamed…”  She said he made derogatory comments about other contestant’s body parts, too.

After the event, in which she placed fourth, Kalasho sent her text messages including half-dressed photos of himself, Kargar says.”He has this competition and says it’s to empower Middle Eastern women, and instead he treated us like slaves,” she concluded.

The prior lawsuit was filed by Zhara Tawfiq, who was stripped of her crown due to a contract dispute. She claimed Kalasho demanded passwords to post information on her social media accounts and that when she refused,  faked photos showing her face on someone else’s nude body appeared on an Instagram account (since removed) that purposed to show Miss Middle East  ““exposed.”

Her suit claims the pageant itself is fraudulent and says she was never assigned any appearances, but made several on her own including hosting a party for Syrian refugees and appearing at a camp for underprivileged children.

Kalasho told ECM in June that he “absolutely” did not post the doctored photos; he said Tawfiq breached her contract by not selling tickets to this year’s pageant, not appearing at five mixers for the San Diego Chaldean American Chamber of Commerce  (which Kalasho headed up until stepping down recently to avoid conflicts of interest with his Council position), and didn’t post pageant information on social media. He insisted he did not ask for her passwords and said of Tawfiq, “For her, this is about fame and money.”

The Reader also quotes a pageant volunteer, Josh Parker, who said he tried unsuccessfully to get Kalasho to stop cursing at the women contestants.  He says Kalasho “told the girls that he controlled them and they should refer to him as god.”  Although  Parker says Kalasho forbid staff from talking to media, he came forward because “I have no faith that he is in it for the right reasons.”

Kalasho has been involved in numerous past litigation, including a case filed by Ideal Market against him in which the judgment indicates he was found to have committed fraud.

Kalasho is not the only beauty pageant operator to be linked to impropriety.

Donald Trump, now President, once crudely bragged on shock jock Howard Stern's TV show of walking backstage into dressing rooms to “inspect” while women contestants were naked or partially undressed. CNN aired video in which Trump told Sterm that as pageant owner, “I sort of get away with things like that.”  Trump said he'd been propositioned by pageant contestants.  When asked by Sterm about countries of international contestants with whom he'd had sex, Trump replied“How many countries are there?”

In California, where Kalasho faces civil actions, offering to trade workplace favors or advancement for sex is considered quid pro quo sexual harassment, though it remains to be seen whether or not a court will find evidence to hold Kalasho accountable.