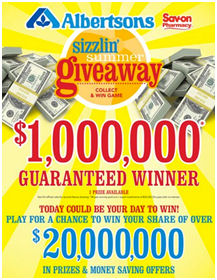 By Rebecca J. Williamson
July 10, 2012 (San Diego's East County) -- The secret life of a giveaway collect & win game?  Gosh, most people would think a secret life involves actors pictured on the cover of the grocery store tabloids.  But no. This secret life involves various states, $20 million in giveaways (including a million bucks cash prize) and many East County residents-- neighbors you wouldn’t think have a secret life. But they do.
To boost your chances of winning use what is at your fingertips—the internet.  Hence:  the secret life of your neighbors.  Some hunt on Craigslist, Facebook, and any other websites for the game tickets they need. As it gets closer to the end of the contest, August 21, 2012, the Internet searches might be even more intense with offers for exchanging game tickets.
Craigslist had opportunities to split a big monetary prize by providing a SC04 game ticket. Also other listings had bartering available, but these listings can change by the hour and day.
East County residents can also search on Facebook by going to Albertsons Sizzlin’ Summer Giveaway Trading Post to compare notes.  Yelp has a customer entry noting the event.  One website had a participant state “…and the addiction’s picked right back up again.” –P.
Albertson’s has reintroduced the popular game, one for customers and one for employees (their secret life)  very much like a previous promotion.  Win a bell pepper.  Win 250 preferred points. The list goes on.The pressure of finding that one remaining game ticket to complete your set to nail that $1,000.000 prize has started.
Coupons, computer entries of numbers, and taping your game markers to the board are in the mix. With every grocery item purchased you will receive a preordained number of game tickets.
Disappointment still lingers for some from the previous contest.  A customer outside the Santee Albertsons’ voiced what will be others feelings as well.  “I made it a point to come here for my groceries.  Spent good money and didn’t get anything,” said “L.” a Santee resident who wished to remain anonymous.
Would “L.” use the internet to create a resurgence of luck?  “No.  I’m not trying again.”
Her secret life of collecting and strategizing for the game tickets has ended.
That stated, the official game board can be seen on office desks, counter tops, even outside the store in customer’s cars. Ever asked the 21 year old buying beer and chips if he wants his game tickets? You know the answer is yes, even based on your quest for the 2011 game pieces.
The economy is tight. Running on a daydream is real, palpable. Remember the spells here and there of lottery fever?
With the game ending August 21, 2012 the summer Olympics might not be the only games to watch.  Ladies and gentlemen start your Internet searches and trading.