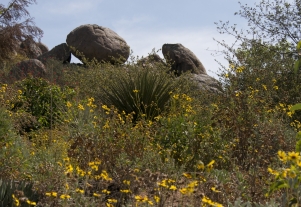 Cover photo:  The view from the California Sunflower trail in the "Nature Adorned" garden

March 8, 2016 (San Diego’s East County) -- Jean and Jerry Kaiwi look contentedly over their 2½-acre home site near Flynn Springs, enjoying the view from a patio table along a trail above their house. “It used to be that you couldn’t even see the land contours – the entire lot was covered with waist-high mustard,” says Jean. “ Now the beautiful natural contours and rock outcrops are finally visible, complemented by our native plants.   We so enjoy them, along with all the native birds, lizards, snakes and bees that now share this space with us.”

Jean had been a pretty successful “plant any ole’ thing” gardener, even winning 2nd place as Padre Dam Municipal Water District’s Garden of the Year 2005.  So you can imagine Jerry’s shock when he came home one day to find that she had ripped out a dozen pepper trees that she had planted only a few days before. 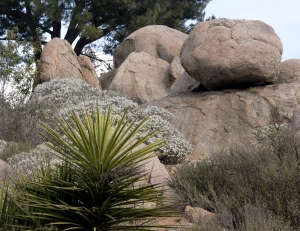 (Photo, right:  Native Mohave yucca provide a stark contrast with the boulders in the Kaiwi's landscape)

“I had an epiphany after talking with my sister, an avid native gardener in the Bay Area, who got me thinking about reducing water consumption and providing habitat for the native fauna” Jean said.  That conversation led her to decide to quit ignoring the environment and start celebrating the plants that are adapted to our hot, dry conditions.  They removed a lot of non-natives, encouraged the native plants already growing on site, and added other California species that they particularly liked.  A decade later, they’re so pleased with the changes they’ve made that they decided to open their property for hundreds of strangers to visit.

The Kaiwi’s landscape is one of 20 native plant gardens featured in the Garden Native Tour, April 2nd and 3rd, presented by the San Diego chapter of the California Native Plant Society.  Each year, the tour focuses on a different part of the County, with this year’s “Landscaping for the Future” tour highlighting inland San Diego County, from SDSU to the foothills.

“Everyone in the region is starting to experience more extreme weather conditions, so it makes sense to look to gardens that are thriving in the hotter, drier areas as an example to all of us”, says tour organizer Dave Flietner. “California natives have evolved in this climate and can look great with minimal water.” 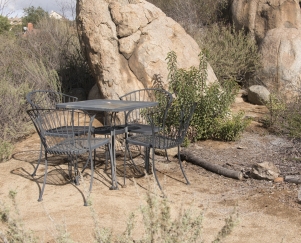 (Photo, left:  Jean and Jerry enjoy watching the sunset over their garden from this perch)

Because they’re located relatively far from the bulk of the gardens on the tour, Jean and Jerry’s garden, dubbed “Nature Adorned,” will be viewable only on Saturday, but it will be open until 6:00 p.m., later than the 9:30 a.m. – 4:30 p.m. viewing period for most tour gardens.  Two other far-flung gardens, in the Deerhorn Valley area, similarly will be open late on Sunday.

Knowledgeable volunteer docents will be on hand at all the gardens to share the unique pleasures of that garden.  Many gardens include some special feature, like a demonstration of a lawn-to-meadow conversion in Santee, or a steep slope planting near Mt. Helix.  Visitors to “Nature Adorned” can grab a map of the trails winding through the property, with the native plant highlights noted.

To learn more about the Garden Native Tour and to purchase tickets -- $25 for adults, kids free – visit www.gardennative.org. 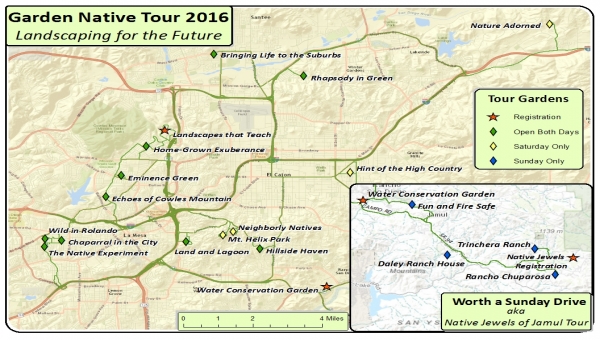 Scroll down to find William Flinn.
"It was through the generosity of family patriarch William Flinn that the private Flinn Springs Cemetery became burial ground for the local area.
https://books.google.com/books?id=U0xM6ZQTKpgC&pg=PA49&dq=flinn+springs&...