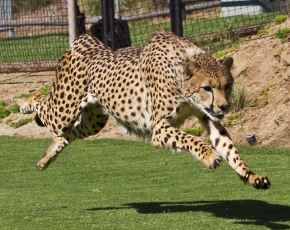 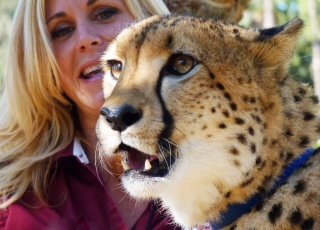 June 30, 2011 (San Pasqual) – Capable of accelerating from 0 to 70 mph in just seconds, the world’s fastest land animal bounded across a track at the San Diego Zoo Safari Park’s Cheetah Run in a premier run for media this morning.

This adventure will be unleashed to the public starting Saturday, July 2nd at 5 p.m. daily. 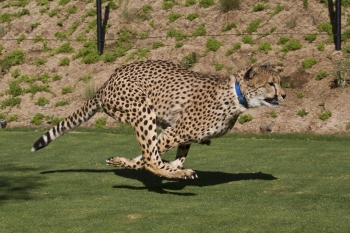 Viewing the Cheetah Run will be free to park visitors daily to watch from behind a rail as the spotted feline chases a mechanical lure with its favorite toy attached down a 330-foot track.  Or opt for a "Cheetah Run Safari" upgrade for a $40 fee, which includes an up-close encounter with a cheetah in a VIP reception area after the show.

The Park’s newest attraction is all part of Summer Safari: African Extravaganza, which runs July 2 to August 21, when the park remains open until 7 p.m. The Extravaganza also includes acrobats, artisans, performers, storytellers, special foods and more. 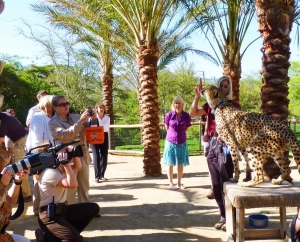 iley, one of 23 cheetahs at the park, is named after Darlene Shiley, a local philanthropist who helped make Cheetah Run possible. has forged a friendship with an Andalusian shepherd dog raised with the endangered feline. The dog, Yeti, runs the 300-foot long track first, providing encouragement to Shiley. Lean and muscular, the big cat completes his run in seconds – so don’t blink or you'll miss out on the action!

The domesticated dog’s presence calms Shiley, who is still acclimating to the new track and the VIP reception area. “The dog lets Shiley know that it’s okay—we love people,” keeper Janet Rose explains. Shiley pulled at the leash, clearly eager to return to the grassy run. “We’ll have to put a patch of grass in here,” said Rose.  Shiley then hopped onto a platform and obligingly posed for visitors to snap photos. 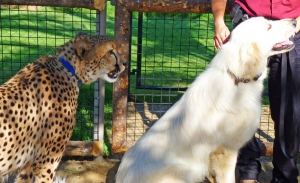 Born to run, cheetahs benefit from the exercise, which helps build up their metabolism and keeps them healthy, according to a Park spokesperson. Since the Park’s breeding program began in 1970, more than 135 of these encangered species have been born here, including two cheetahs on exhibit daily at the Heart of Africa area in the park.

In the VIP area, guests will also meet another African animal, such as a vocal owl that demonstrated its screeching prowess during our visit.(See owl video.)

The Cheetah Run Safari is the latest of several safari options available to park visitors, with others ranging from a Segway Scooter Safari to a Photo Caravan Safari.

Seems Amusing!! I think zoo safari is a very thrilling activity. I would love to do that, I always get fascinated towards wildlife. After dark