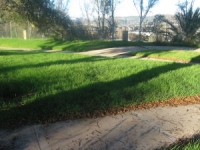 February 25, 2013 (El Cajon)- Last Saturday was a celebration of community gardens in El Cajon where the public was invited to different garden events around El Cajon. At the IRC-Kaiser community garden at 203 Travelodge Drive, Anne Barron, community garden coordinator from the International Rescue Committee, gave the public a complete tour of the garden.  Still in the production stage, the garden is set to open in mid-March.

Each individual plot/stake is 10 feet by 10 feet. “They will feed a family of four for a month,” Barron explained, then gave some background on how the garden came about. “Kaiser is giving the land for free to be used for at least three years if we take good care of it.”

A chain link fence that is behind the walkways will be moved to behind the garden, so the public can use the walkways” and they won’t disturb the garden. Around the garden included a structure that will be enclosed for storage and a top will be added, along with a compost house that high school students from Gonzaga, Washington helped build. These will a part of the garden that only the gardeners can use.

The public part of the garden includes demonstration plots and cover crops with “three different plants coming up. As they grow, they’re putting nitrogen in the soil.” There is also a mulch pile and a ficus tree, which is “one of the few trees we’ll leave as is. The roots of the tree are incredibly important to the soil’s health.” 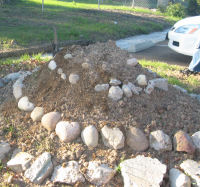 Barron also led the public to an “herb spiral, which is another way to grow plants.” Herb gardens save space in a small garden, and they create micro-climates, so gardeners can grow different types of herbs in a single space. (http://www.ehow.com/about_6539370_spiral-herb-gardens.html)

When an El Cajon resident had a question about dealing with unwanted animals and rodents, Barron told her, “We like foxes and barn owls. Our main problem is gophers, so we’ll trap them” by killing them. “We caught six gophers so far. They don’t like soft soil. Once the soil gets soft, they won’t be able to create tunnels because they like the firm soil.” 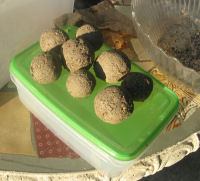 After the tour, Barron demonstrated how to make ‘seed balls’ using a same amount of compost, clay, and seeds from cover crops like alfalfa, which adds nitrogen to the soil, as well as buckwheat, a native plant that helps stop other weeds from growing, in a big container.

“You don’t have to wear gloves. Now, the trick is to add water to form balls, not hard mud”, she said; the mixture should cover the bottom of the container and then you shake it up until it forms the balls. “Let it set for a week. You take it and place it in an empty spot of land. Then, in a couple years, it’ll create a ‘microforest’ or garden. You want the right kind of seeds. For here, San Diego native soil is desert soil. Use cover crops like the California poppy or toyon seeds from toyon trees. “

ECM also got a chance to interview a husband and wife, who are gardeners originally from Iraq. Fiheema and Benjamin came with their grandson, Danny. 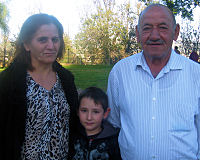 They came to America because America is safe, Fiheema told ECM.  Having a garden is important to them for “good health.”   They hope to grow tomatoes and other vegetables.—but not for selling at El Cajon’s soon-to-launch Farmer’s Market. Instead, they look forward to harvesting vegetables to feed their family.