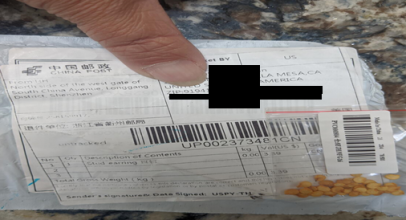 July 28, 2020 (La Mesa) – Across the U.S., residents in at least 31 states have begun receiving mysterious packages of seeds from China.  A La Mesa resident is among those to receive the unsolicited and potentially dangerous seeds, according to a photo and post on a local social media site.

If you receive unsolicited seeds from  China, agricultural officials urge that that you do NOT plant them. Instead, take a photo and email it to phpp.awm@sdcounty.ca.gov. Then double bag and drop the package off at 9321 Hazard Way, San Diego. Call (858)694-2739 with any questions.

Authorities don’t yet know if the seeds may be invasive species that could be harmful to agriculture or native plants, USA Today reported yesterday.

Kentucky Agriculture Director Ryan Quarles told CBS earlier this month, "At this point in time, we don't have enough information to know if this is a hoax, a prank, an internet scam or an act of agricultural bio-terrorism.  Unsolicited seeds could be invasive and introduce unknown diseases to local plants, harm livestock or threaten our environment."

North Carolina’s Plant Industry Division director Phil Wilson has speculated that the shipments could be part of an internet scam known as “brushing” to generate fake sales and positive reviews of products.

The U.S. Department of Agriculture is working with state and federal agency partners to determine what type of seeds are in the packages.  "USDA is aware that people across the country have received suspicious, unsolicited packages of seed that appear to be coming from China," the USDA's Animal and Plant Health Inspection Service (APHIS) said in a statement Tuesday.

Yes this has all of the signs of being a brushing scam. Unfortunately, another kind of scam we all have to learn about. In its most basic form it is about creating false recommendations on ecommerce sites. It not about stealing from you, well except that they borrow your identity to make a fake positive recommendation! Some ecommerce platforms verify that a sale is legitimate, and therefore a positive customer review is legitimate, from having a shipping code that "proves" "the buyer" received the product and is happy with it. Otherwise, bad actors could just ship scores of products to themselves with fake accounts, so a thing - seeds for example - must be shipped to a customer that appears legit. In the larger picture, the scammer really just needs to ship a product to some address, anywhere, so they can have a buyer account they control to give positive customer reviews, and thus scam other buyers on the site. It is not good, as in this case there is a false record that you bought something, and there will be a user account on that website with your address, and maybe your real name too. But it is worse for someone in the world paid for some nice jewelry based on A+++ good recommendations, and also got seeds! At least you didn't pay for them. This seems to me to be a bigger problem on some Chinese sites like taobao.com or alibaba.com... aliexpress.com, etc. These are legitimate sites, I have always found them to be honest, dependable and fair with good products. This scam has happened with amazon and ebay too. Anyway, you don't need to worry too much if someone is sending you free trinkets. But it is good to report it to your local post master.