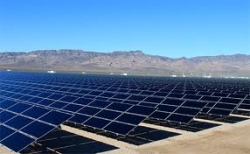 The award was announced at the Renewable Energy World Conference and Expo currently underway in Tampa, Fla. Copper Mountain Solar was selected out of hundreds of nominations in the category.

“We are honored to be recognized for our work to develop Copper Mountain Solar, especially considering the number of innovative solar projects completed in the past year,” said Jeffrey W. Martin, president and chief executive officer for Sempra Generation. “Given
the 330 days of intense sunshine each year and the network of transmission lines that provide access to markets throughout the West, there are few places better suited for utility-scale solar than southern Nevada. We look forward to expanding the Copper Mountain Solar complex by hundreds of megawatts in the coming years to meet the growing demand for clean, renewable energy.”

Sempra Generation is focused on utility-scale solar development in California, Nevada and Arizona. The company’s development pipeline now exceeds 1,000 MW and includes large land positions in each state that support multi-phase solar projects. In mid-2011, the company expects to break ground on the first 150-MW phase of its Mesquite Solar complex, which is a 700-MW photovoltaic development opportunity located west of Phoenix.

The Renewable Energy World Network is one of the world’s largest distributors of news and information about the alternative energy industry.