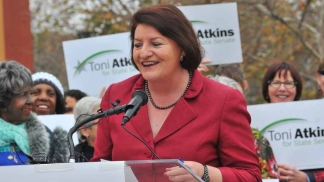 December 19, 2018 (San Diego) - Recalling the deadly hepatitis A outbreak, state Senate leader Toni Atkins on Tuesday urged public officials at all levels to coordinate responses to what she called the ongoing humanitarian crisis in San Diego and Tijuana.

“I am watching with growing concern as thousands of migrants are released into the San Diego community in the middle of the night without so much as a meal to sustain them for one evening,” the San Diego Democrat said in a statement.

She said the consequences of inaction can be dire — as San Diego County saw when a “lack of focus, action and coordination” resulted in the death of 20 people and the infection of hundreds of others with hepatitis A.

“We can and must do better than this,” Atkins said regarding the plight of asylum-seekers and other undocumented aliens landing in San Diego.

Atkins said she was having “productive conversations” with San Diego Mayor Kevin Faulconer.

“Clearly, the federal government has abandoned all responsibility on this matter, and it is incumbent upon us to step in and find a solution,” she said.

For months, Atkins said, Immigration and Customs Enforcement has been releasing migrants into the San Diego community without the proper support they need.

The San Diego Rapid Response Network has stepped in to persuade ICE to release the migrants to their care so they can conduct health screenings, find shelter and connect them to family members while their asylum cases are adjudicated, she noted.

“Relying on nonprofit social service agencies to shoulder this entire responsibility and without the resources to do so is not a process that can be sustained indefinitely,” Atkins said. “There is no excuse for inaction, it is the government’s responsibility to step in and solve this potential crisis.”

Atkins said she also is calling on county and state officials to provide services and funding.

Finally, she said, “I call on Congress and the federal administration to find a coherent, long-term solution to ensure migrants can exercise their right to seek asylum in a safe and orderly way, in accordance with U.S. and international law.”