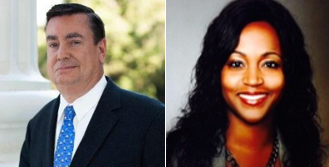 August 31, 2018 (San Diego's East County) --Long-time East County politician Joel Anderson (R-Alpine), likely didn’t intend to end his tenure in the California State Senate with accusations that he recently made a threat to strike a female lobbyist at the Diplomat Steakhouse Restaurant, across the street from the state Capitol in Sacramento.

Anderson, who is running for State Board of Equalization now that he is termed-out in the Senate, denies making a threat and says his words were misunderstood in a noisy restaurant.

Lobbyist Stephanie Roberson with the California Nurses Association has filed a complaint with the Senate Rule Committee. Another lobbyist who witnessed the incident said that Anderson approached Roberson to complain that the group didn’t endorse him. He allegedly made harassing comments about Roberson’s appearance and then said, “You better shut up before I bitch slap you.”

According to the Los Angeles Times, a witness confirmed the incident and stated that Anderson repeated the threat several times. The incident was allegedly observed by restaurant staff who confirmed that a male patron threatened to hit a woman; staff intervened and escorted Anderson outside, the newspaper reported. Two other witnesses who requested anonymity told the Los Angeles Times that he was removed by the restaurant staff.

The investigation of the incident is being handled by an outside counsel who will report back to the Rules Committee.

Anderson released a statement apologizing for the incident. “I have the utmost respect for Stephanie and I sincerely regret my word choice that was not directed at her,” Anderson said. “I welcome the Rules Committee investigation to clear up this misunderstanding.”

Since the incident, reports have surface that Roberson has had her own brushes with controversy. According to a report by journalist Katy Grimes of the right-leaning The Flash Report news website, California Superior Court records show that in late 2016, Roberson attacked a woman in the Blackbird Bar in Sacramento and was arrested for assault and battery, and for causing significant damage to the bar. (The bar closed permanently in 2017.)

According to the court documents, Roberson was ordered to have no contact with the female victim, and to never return to the bar in which the incident took place. And, as part of a plea agreement with the court and the Sacramento District Attorney, she was also ordered to take anger management classes.

In an interview with Grimes, Senator Anderson said he had never requested the endorsement of the California Nurses Association. The article reports that Anderson delivered a fiery floor speech in June 2017 in the Senate opposing the single-payer health bill that Roberson and the CNA were promoting.

The Flash Report quotes Anderson with a different account of what happened.

Anderson said the bar was busy and loud. He stated that he and former Sen. Rod Wright were also talking with others when Wright suggested they move on to another restaurant, but that Roberson told them  “Oh no, stay here.’”

Anderson said bar employees quickly walked up to him and asked him to leave. As this was happening, Anderson said Roberson looked at him and said, “I’m going to get you.”

Anderson’s district includes most of San Diego’s East County, where he served as a member of the State Assembly before being elected to the State Senate. He has previously indicated he may run for the Board of Supervisors seat to be vacated by Supervisor Dianne Jacob due to term limits in 2018.

Supervisor Jacob, a Republican, recently issued a blistering criticism of Anderson via Twitter (along with Rep. Duncan Hunter and El Cajon City Council Member Ben Kalasho) who have found themselves tangled in breaches of government ethics in their recent conduct.

Jacob said the officials “violated the public trust,” adding, "If criminal charges against Congressman Hunter are true, he must resign. At the very least, voters must hold him accountable in November, just as they should with State Senator Anderson and El Cajon Councilman Kalasho, who have embarrassed themselves and failed those they were elected to serve. As Ronald Reagan reminded us, character matters.”