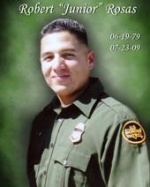 June 15, 2011 (Sacramento)-- Senate Concurrent Resolution 37, authored by State Senator Joel Anderson (R - El Cajon) has been approved by the California State Senate. The measure would dedicate a portion of Interstate 8 in honor of f Border Patrol Agent Roberrt Rosas Jr., who was murdered while on duty in the Campo area of San Diego’s East County on July 23, 2009.

Rosas was patrolling the Shockey Truck Trail near the border when he was ambushed and killed by smugglers who intended to rob him. Four of the five assailants have been caught.

“He was a true hero in every sense of the word,” Anderson said of Rosas. “Hopefully the federal administration will one day finally provide the resources needed to truly secure our borders and prevent senseless tragedies such as the death of Robert Rosas.”

Before his career as a Border Patrol Agent, Rosas served as a correctional officer at Centinela State Prison as well as a reserve police officer for the El Centro Police Department. Rosas was born and raised in Imperial County and was often called the “Mayor of El Centro” because of his popularity. He was 30 years old when he was killed. Rosas is survived by his wife Rosalie, their two children, Robert Mathew and Kayla Alyssa, as well as his brother, two sisters and his stepfather.

SCR 37 will designate a five mile stretch of I-8 near Kitchen Creek Road as the “Border Agent Robert W. Rosas Jr. Memorial Highway.” Signage for the highway will be paid for with private funds.

The Senate Floor vote on SCR 37 was unanimous and the measure now heads to the State Assembly.