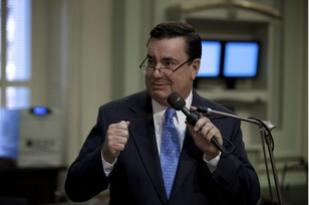 January 9, 2016 (San Diego’s East County) — Senate Bill 333, a measure that would have made it a felony to possess drugs used for date rape, was vetoed last fall by Governor Jerry Brown.  The measure had passed both the Assembly and Senate unanimously.

Last Thursday, Senator Joel Anderson (R-Alpine), a coauthor of the bill, called for the Senate to override the Governor’s veto.  But the motion failed to receive the two-thirds vote required on the Senate floor.

Anderson stated, “Today my colleagues had the opportunity to stand up for women and all rape victims and tell Governor Brown there is nothing human or just about rape, and that we value them more than the cost of incarcerating rapists.”

The Governor’s veto message noted that the bill would have created a “new crime—usually by finding a novel way to characterize and criminalize conduct that is already proscribed…Over the last several decades, California’s criminal code has grown to more than 5,000 separate provisions, covering almost every conceivable form of human misbehavior. During the same period, our jail and prison populations have exploded.” Governor’s Brown’s veto message said we should ‘reflect on how our system of criminal justice could be made more human, more just, and more cost-effective.’

The measure was one of several bills vetoed by the Governor that would have created new felony crimes or extended prison sentences for current crimes after federal courts ordered California to reduce prison overcrowding.

SB 333 was introduced by Senator Galgiani (D-Stockton), and principal coauthors: Senators Anderson and Vidak and Assembly Members Cooper and Lackey, and 14 other Senate and Assembly coauthors. SB 333 had overwhelming bipartisan support passing the Senate 39-0 and the Assembly 78-0.

Other bills vetoed by Governor Brown that would have increased the prison population include measures that would have required fugitive sex offenders to spend up to three years in prison, made it a felony for police to alter or delete video evidence, and made theft of a gun or bringing ammunition onto school grounds misdemeanors punishable by up to three years in prison.

Veto overrides are a rare occurrence. The last successful veto override was of Governor Jerry Brown way back in 1980, 36 years ago.

Senator Anderson called upon the Women’s Caucus to join him in the override. “Within the context of national attention on the Bill Cosby case, it is unconscionable that the Governor and the State legislators prefer to stand with the predators rather than their victims,” said Anderson.

Anderson pledged, “As Vice Chair of the Senate Public Safety Committee, I will continue to fight for victims and oppose any and all predators who use date rape drugs."

In fairness it should be noted that Democrats have accused Republicans of waging a war on women, and there is some truth to that. All of the GOP presidential candidates want to restrict reproductive freedoms for women. Most of them think if you're raped you should be forced to carry the rapists' baby- victimizing a crime victim, or if your baby has a serious birth defect such as no brainstem (ie a baby that can't live more than a few hours or days); some would not allow abortion even if a mother's life is at stake.

Many abhor the Governor's veto of the date rape bill, but also abhor men who want forced birth for women in even the most extreme circumstances becuase of their own personal religious viewpoints. Most Americans do not believe that a fertilized egg deserves more "rights" instantly after conception than an adult woman who has suffered a serious trauma or could die without medical treatment.  But we are dangerously close to seeing that happen in America, if any of those candidates win the presidency and Congress stays in GOP control, since the Supreme Court is one vote away from overturning Roe v. Wade.  That's the far broader war on women, and it's ironic that the GOP is now trying to twist a single bill vetoed for prison overcrowding reasons to try and mask their long-running assaults on women.The Republicans in Congress have also consistently opposed efforts to provide equal pay and maternity leave for women, affordable healthcare, and a rise in the minimum wage nationally to help lift women out of poverty.

...by the Democratic Party. There's no other way to put it. Democrats will spend money to forbid conceal carry license holders on campuses, to aid illegals, etc., but when it comes time to step up to protect Californians, e.g. do away with Sanctuary Cities, protect women from rape, etc. they show their true colors. They should be ashamed of themselves......but then Democrats have no shame.
let's call it what it is. Rape, Planned Parenthood, etc...... it's a war on women. When will they speak out on this issue?