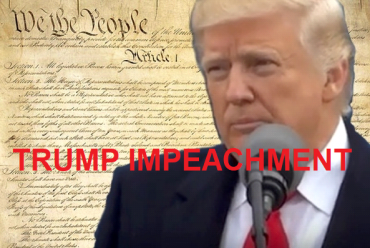 The New York Times concluded, “In the end, the story told by the two articles of impeachment approved on Friday morning by the House Judiciary Committee is short, simple and damning: President Donald Trump abused the power of his office by strong-arming Ukraine, a vulnerable ally, holding up hundreds of millions of dollars in military aid until it agreed to help him influence the 2020 election by digging up dirt on a political rival.

When caught in the act, he rejected the very idea that a president could be required by Congress to explain and justify his actions, showing “unprecedented, categorical and indiscriminate defiance” in the face of multiple subpoenas. He made it impossible for Congress to carry out fully its constitutionally mandated oversight role, and, in doing so, he violated the separation of powers, a safeguard of the American republic.”

The Salt Lake City Tribune’s editorial stated, “Some in both chambers may honestly believe that the removal of a duly elected president, less than a year before he is to face the voters, would be overreach. But there is no question that this president has committed impeachable acts. His blatant threat to withhold millions in congressionally approved security assistance to Ukraine, which was and is facing an ongoing threat of Russian hegemony, unless that nation’s president helped our nation’s president spread damaging rumors about one of his key political rivals placed the security of both nations, and the world, behind the president’s own personal and political interests. And the administration’s refusal to assist or even participate in the committees’ work amounts to an unconstitutional obstruction of congressional oversight powers.”

An Internet search found only two publications opposed to impeachment. The Wall Street Journal criticized Democrats for not filing broader articles of impeachment, writing, “So that’s it? That’s all there is? After all the talk of obstruction of justice, collusion with Russia, bribery, extortion, profiting from the Presidency, and more, House Democrats have reduced their articles of impeachment against President Trump to two: abuse of power and obstruction of Congress. Honey, we shrunk the impeachment.”

The Chicago Tribune, in an editorial written before the House Judiciary sent impeachment articles to the full House for a vote, concluded that the President did engage in wrongdoing, but called for censure instead of impeachment as an option more likely to gain Republican support.: “The option we see more fitting to address Trump’s abuse of power is for both houses of Congress to censure him. We do not envision a weak-kneed admonishment that Trump can dismiss. A resolution of censure would spell out in detail the president’s betrayal of trust and his failure of responsibilities by placing his personal political interests above his obligations to the nation. This resolution could adopt the language that could otherwise appear in articles of impeachment. While Trump likely would vilify his accusers, we hope that some Republican members of Congress would do the right thing and sign on. A condemnation of Trump’s conduct would allow a polarized nation to reestablish a common standard of ethical behavior that Trump — in his deviousness and recklessness — has jeopardized.”

"The Wall Street Journal criticized Democrats for not filing broader articles of impeachment, [ . . . ]"  I agree.  At least, there should have been an additional article on President Trump's many violations of the two constitutional emoluments clauses.  Both foreign and domestic, these corruptions would be very easy to doccument.

"Dozens of  major newspapers including virtually all of the nation’s top newspapers have published editorials calling for impeachment [ . . .]"  Unfortunately, few in Donald Trump's base read newspapers, and a large fraction of that group can barely read at all.

Your comments are extremely rude. This woman can read! Maybe you should read the law. Your are really going to like this!!! If and WHEN the Senate decides not to impeach President Trump, his first term is not counted and he can run for 2 additional terms. I find this tidbit a joy to let you and all you haters to know. TRUMP 2020, TRUMP 2024! Geez, I feel so giddy, HOW ABOUT YOU?
Don’t take the insults too seriously, this site is infested with Liberal Milquetoast Soyboys. Take comfort in knowing that while they’re trying to figure out which bathroom to use, or which pronouns to announce on their profiles, we’re well on our way to victory at the polls this coming November. Look folks, this is basically a nasty divorce. Irreconcilable differences. The left doesn't act like patriotic Americans nor do they embrace traditional American values. We have nothing in common other than having the privilege of living in this country. It's not us, it's them. MERRY CHRISTMAS! (That'll trigger a few ;))