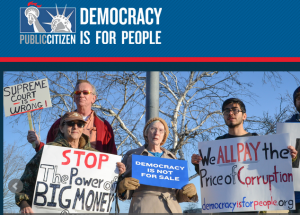 September 8, 2014 (Washington D.C.)--The U.S. Supreme Court decision in the Citizens United case threw out campaign finance restrictions and ruled that corporations, unions and other special interests can make virtually unlimited contributions to political campaigns.  Critics have argued that this is bad for democracy, giving powerful special interests too much influence on elections.

Today, the U.S. Senate voted 78 to 18 in favor of a constitutional amendment that would overturn Citizens United.  (4 Senators did not vote.)

It wasn’t easy for Democrats to get enough Republicans to meet the two-thirds requirement for a Constitutional Amendment to pass the U.S. Senate, since the Republican Party and many of its most prominent Senators support Citizens United – and take large sums for their campaigns from the very corporations that supporters of the amendment seek to restrict. They contend that this is protected “free speech” under the First Amendment. Many Democrats also take large contributions from labor unions and/or corporations.

So how did Senate Majority Leader Harry Reid convince 78 of 100 members to vote for the measure?

By threatening to cancel trips home and keep the Senate in session over the weekend.

Some members less than enthused about the measure may also have voted to pass  it knowing that it will face stiff opposition in the House, which is controlled by Republicans who are not likely to allow the measure to come up for a vote.

That doesn’t mean it’s dead, however. After the November election, the next Congress could take it up and pass the measure, if they can muster up the two-thirds majority.  But even then, it would still face a long uphill climb.

Since the U.S. became a nation in 1776, only 33 constitutional amendments have ever been passed by Congress and of those, only 27 were ratified by the states to become part of the Constitution.  The first 10 amendments were ratified collectively as the Bill of Rights in 1789.  That means just 17 have been approved since then, more than two centuries later.

A constitutional amendment must either be passed by a two-thirds majority of both houses of Congress, or approved at a national constitutional convention called by Congress for this purpose.

Next, it must be ratified, or approved, by three-fourths of all states, currently 38 states. Congress may set a time limit on ratification by the states, if it chooses, and has historically limited this to seven years.

So what, specifically, would the Constitutional Amendment accomplish if it is ultimately ratified?

The amendment also makes clear that Congress can make distinctions between people and corporations and prohibit the latter from using money to influence elections. That comes after the Supreme Court invoked a doctrine known as “corporate personhood” to find that corporations have the same rights as people.  The measure also makes clear that the constitutional amendment in no way seeks to abridge freedom of the press.

Senator Bernie Sanders of Vermont, the only Independent member of the Senate, stated before the vote that, “The major issue of our time is whether the United States of America retains its democratic foundation or whether we devolve into an oligarchic form of society where a handful of billionaires are able to control our political process by spending hundreds of millions of dollars to elect candidates who represent their interests.”

It would also prohibit the Supreme Court from reversing any future campaign finance legislation passed by Congress.

If the Constitutional Amendment fails to win approval in Congress plus ratification of 38 states, there is one other way that the Citizens United ruling could potentially be reversed.

The ruling was handed down by the Supreme Court with a slim 5 to 4 majority – a one vote margin.  So a future vacancy on the high court could potentially give the current or next president an opportunity to appoint a justice who could become a swing vote, should a future case challenging Citizens United come before the high court in the future.

Let's repeal the 1st and 2nd Amendments to the Constitution. No one should own a gun and only voices for the left should be heard in the public square!