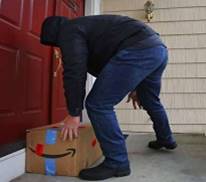 Several times during the current pandemic packages have been placed on my porch. OK; but they didn't even ring the doorbell. If I hadn't checked for mail, the packages could have been there for hours. I've complained to the companies; but nothing seems to have been done. I have also signed up with UPS My Choice to have all UPS packages delivered to a nearby UPS store where I walk over and have to show photo ID. Some companies, despite my pleadings, put a restriction on the package, which means it must be delivered to my home address. This makes NO sense as it would be much safer delivered to UPS local store requiring photo ID and wouldn't cost them a cent.

While so far I have not been victim of porch piracy, my next door neighbors were. And recently when walking my dog I saw a package left outside of their gate. Who ever delivered it didn't even bother to put it on their porch, it was next to sidewalk.