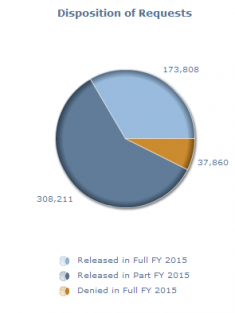 March 17, 2016 (Washington D.C.)—The U.S. Senate has unanimously passed legislation with rare bipartisan support that would make it easier for the public and media to obtain government records under the Freedom of Information Act.

The bill was authored by Senator John Cornyn of Texas with San Diego Congressman Darrell Issa as the lead sponsor of the bill.

Issa issued this statement: "To reign in government, we must make it easy for everyone to see its overreach. Right now, most FOIA requests are handled with the mindset that government should withhold as much information as possible and deny any request determined to be too sensitive or too embarrassing to disclose. The bipartisan legislation passed by the Senate today will help level the playing field to ensure the American people have access to the information they are entitled to."

In recent years, journalists, researchers and the public have often complained about delays and unnecessary redactions of information under public records requests.  A chart at www.FOIA.gov  reveals that while only a fraction of FOIA requests are denied outright, the majority are filled only in part, with some material redacted (censored) or withheld.

The new bill, if signed, would require that agencies identify a “foreseeable harm” if they withhold documents. It would also require creation of a single FOIA request portal for all agencies and limit how long certain documents can be exempted from disclosure. In addition, more documents would be available online, a measure that could make obtaining public records less costly for the public and media.

Because the House has already passed similar legislation which Issa introduced last February, he added, “I am looking forward to hammering out the details between the two bills to send a final solution to the President's desk for his approval as soon as possible."

In an interview with The Hill, Senator Patrick Leahy, a Democrat from Vermont, stated, “"If the president receives this bill, he'll sign it.”

The bill passed by the Senate yesterday  is similar to Congressman Issa's FOIA Oversight and Implementation Act (H.R. 653) that passed earlier this January. The bills will be merged in conference before being sent to the President's desk for his signature and final approval.