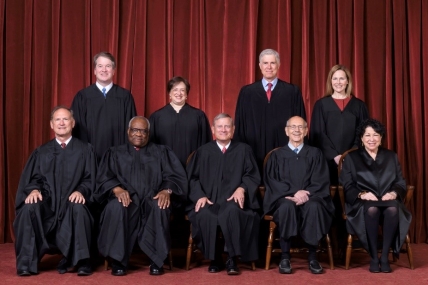 May 12, 2022 (Washington D.C.) – In a rare show of bipartisanship, the U.S. Senate has unanimously approved the Supreme Court Police Parity Act, which would provide police protection to Supreme Court Justices and their families round-the block.

San Diego Congressman Darrell Issa (R-CA 50) has introduced a similar measure in the house of Representatives.

The actions come after a leaked Supreme Court decision indicates that the high court’s majority is preparing to overturn Roe vs. Wade and provide states the rights to regulate or ban abortions, with no exceptions even for rape, victim, or to save the life of a mother.  The leaked document has sparked protests nationwide, including at the homes of conservative justices.

That’s among the factors that have prompted concerns for the safety of justices and their families, though ironically the Supreme Court has previously ruled that it is legally protected free speech for demonstrators to protest at the homes of abortion providers.

“What we are witnessing is the most significant threat in our history to the sanctity of the Supreme Court and the safety of its Justices,” said Rep. Issa. “By acting now, we send an unmistakable message to the mob: Your campaign of harassment and intimidation will not stand.”

“The events of the past week have intensified the focus on Supreme Court Justices’ families, who are unfortunately facing threats to their safety in today’s increasingly polarized political climate,” said Sen. Cornyn, who authored the Senate measure. “We must act to ensure Justices and their families are protected from those who wish to cause them harm by extending Supreme Court police security to family members.”