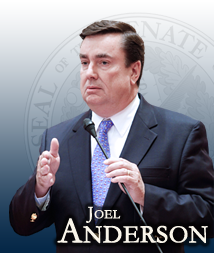 "The addition of Senator Anderson to our Caucus leadership team will provide our political operation a seasoned campaign expert.  Joel has the will and the knowledge to guide our campaigns to achieve our goal of gaining two seats in November," Senator Fuller remarked.  "He will help grow the Caucus to 16 members in 2016."

Senator Anderson responded to Fuller's announcement.  "I am excited that Senate Republican Leader Fuller has tapped me to lead our campaign team this year.  I am proud to have the opportunity to expand our Caucus membership by two members this year."

The announcement comes after Anderson dropped his bid to run against Dianne Jacob for San Diego’s 2nd Supervisorial district seat.