As for the thousands of protesters, he said derisively, “There’s a naysayer in every crowd,” adding that the protesters “don’t like the free market.” As for criticisms of secret dealings behind closed doors, Anderson retorted, “We can’t respond to every wack-job” and insisted the process is not secretive, as critics claim. Reporter Ken Stone with Times of San Diego pressed Anderson, pointing out that he had been denied access to cover some key sessions.

The protesters included a  prominent local business organization as well as labor, environmental, human rights and political reform organizations. They contend that secretive actions conducted behind closed doors by ALEC result in laws that hurt small businesses in America and weaken protections for workers, the environment, and civil rights.

ALEC asks state legislators to introduce model legislation aimed at protecting corporate and business interests.  But not all business groups are on board.

The Neighborhood Market Association, or NMA, which represents markets across San Diego County, spoke out against ALEC this week.

"The political process cannot turn into a back door process,” said Mark Arabo, president of the NMA. “When large corporations are in a position to influence legislation in a way that that undermines the voice of small business and the average citizen, we most certainly have a problem. States like California must be the seeds of Democracy in the U.S. Organizations like ALEC only undermine statewide and nationwide Democratic values.”

A press release from the NMA criticized ALEC as being “infamous for creating statewide generic legislation  making it more difficult to sue corporations as well as creating Voter ID laws and public to private legislation” to privatize jails and schools. 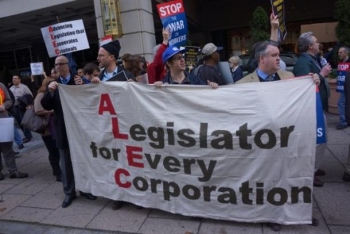 Doug Moore, vice president of the American Federation of State, County and Municipal Employees and president of AFSCME’S United Domestic Workers union, says that ““ALEC works to pass laws that make the lives of Americans harder. We do things differently here in California; we are raising the minimum wage, protecting our families, educating our children and respecting the rights of all Californians.”

He faults ALEC for creating what he calls “anti-worker model legislation including the right to work scam, and building a network of right-wing state legislators who want to slash wages, cut retirement, weaken health and safety, harm the environment, and destroy the middle class.” (photo, right: AFSCME protests ALEC)