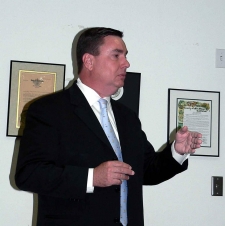 May 5, 2011 (San Diego’s East County) – Governor Jerry Brown has announced plans to travel throughout California discussing the budget deficit with the people. Now Senator Joel Anderson (R-El Cajon) has sent a letter inviting the Governor to meet with people in El Cajon. He has collected letters of support for his invitation from prominent community leaders including elected officials, business leaders, and prominent educators.

If you would like your voice heard and want the Governor to come to East County, Senator Anderson suggests that you send your letter via fax (916-447-9008) or e-mail (senator.anderson@senate.ca.gov; his staff will then deliver it to the Governor.

“All too often in the past, these important, life-changing decisions have been made behind closed doors in the Capitol and I applaud your effort to interact with the people who will be most affected by this issue,” Anderson wrote in his letter to the Governor. “I, along with the attached list of East San Diego County elected officials, community leaders and organizations, formally invite you to meet with us and our constituents at a town hall meeting at the Ronald Reagan Community Center in El Cajon.”

Anderson, a conservative Republican, has been steadfast in opposing new taxes and calling for more spending cuts to close a more than $20 million budget gap.  Democrats have opposed further deep cuts in education and other key programs.  Despite these differences, Anderson's letter struck a conciliatory tone.

“Governor, we want you to directly hear from Californians from all walks of life, from small business owners and their employees to the unemployed, on their ideas how to increase jobs and prosperity in our area," the letter stated. "Then when can all work together to craft a consensus solution for California.”

Letters in support of Anderson’s invitation to the Governor were received from the following:

Found your place on del.icio.us today and rattling likeable it.. i bookmarked it and give be affirm to break it out few many later

Brown is blackmailing Californians into voting for his tax extensions. These budget cuts will prolong the recession. There is very little difference between Brown's budget and previous budgets, because Brown's budget is master-minded by Big Oil and Wall Street (service debt interest). There is no provision for closing corporate and commercial tax loopholes, no oil extraction tax and no oil corporation, windfall-profits tax. Californians pay the highest price for gasoline in the nation. Brown's budget is the same, because again, it picks on the most vulnerable. These taxes has to be rolled-back.

Jerry Brown is a coward and will never attend town hall meetings. He would only agree if he set the audience. He knows how we Californians feel about raising taxes to his so called fees. This is just chicken feed. He'll never do what we expect. The unions have caused our budget to explode and until he addresses the bloded salaries and pensions nothing will change to raise revenue. Over two million people are unemployeed here, gas prices are already $5.00 per gallon in some places and he wants to stick it to us even more. People voted him in and they deserve what they got.