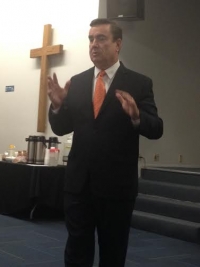 October 29, 2015 (Spring Valley)- On Thursday October 22, La Mesa-Spring Valley School District Board member David Chong hosted Senator Joel Anderson’s community coffee at Trinity Presbyterian Church. Zahara Almosawi, an intern for the Senator, manned a table with resources for the community, including paperwork for anyone who had problems with a state agency.

Chong pointed out that the Senator has hosted “these legislative roundtables in every city he represents.” Also, 40-60% of bills are ideas from constituents. Senator Anderson has won many awards, including Legislator of the Year.

Anderson said it’s a pleasure to serve his constituents. “On average, roughly 3000 bills are introduced every year. This year was a laser-focused year. The governor vetoed 150 bills. 950 bills were introduced.”

Then the questions and answers began.

One man wanted to know how many of the 3000 bills actually had value. “Half of them,” the Senator said.

Another man asked about the government making people move back to the cities. Anderson talked about efforts to promote bike lanes, buses and trains vs. freeways.  “They’re giving a whole bike lane by taking away a car lane. “

A woman wanted to know how community members can make their voices heard. Senator Anderson told her, “The first complaint I’ve heard is to look at people’s voting records and look at their actions.” People’s actions don’t always line up with what they vote on. He believes they should speak out on their beliefs and opinions, and how they truly feel when voting. He talked about the different pillars of government and how the fourth pillar is the press “because they keep us informed.” He pointed out how there hasn’t been much coverage going on in Sacramento and Washington DC. “To serve in the Senate is a privilege. People deserve that representation,” he added.

A man asked about the fire bill. “I live in Alpine. Is there any way the bill can be repealed?” the constituent inquired. Anderson told him, “It’s in court…. You want to make sure you protest on your check or payment so you’ll get your money returned (if there’s a court ruling).”

Jeremy Nikodym from the Wil-Mat Project, which crochets or weaves plastic grocery bags into sleeping mats for the homeless, asked about the plastic bag ban. “I know it was repealed..I don’t know what the wording is now,” he said. The Senator told him, “I was happy with paper bags. Then they banned paper.” He wasn’t sure about the wording either.

Another man expressed frustration over what’s happening at the border. He brought up how illegal immigrants can now get driver’s licenses and said he’d heard that the governor is planning for them to vote. He wanted to know if the part about them voting was true or not. Senator Anderson answered, “I don’t agree with the rationale [of] removing a barrier to encourage more turnout… They’re focused on giving more rights and privileges to that class… I understand their logic; I just think it’s the wrong approach.”

A veteran who immigrated to the U.S. when he was five complained about treatment of vets. The Senator agreed with him. “I fight for veterans all the time.” The Senator then pointed out, “I think we have a moral obligation to take care of people who can’t take care of themselves.” When he looked back at recent bills in the last two weeks, one bill that appalled him was to spend $20 million to protect monarch butterflies, which Anderson claimed is taking away money that could have been spent on children’s healthcare.  He also faulted the Governor for vetoing some measures supported by the people. Also, money has been cut from developmentally disabled services. “These are core issues that should be in the budget,” he added.

Someone else asked about the bullet train idea and if the Governor is giving up on it. Senator Anderson told him, “He’s doubling down, tripling down…”

A man asked about Bill 277, which made childhood vaccines mandatory for kids in California schools. Senator Anderson explained. “There were 48 states that had personal and religious exemptions on vaccines. The bill now removes the exemption,” he said, adding that unvaccinated children can’t go to school. “Everything about this stunk.” Initially, the author said he would put a personal exemption in, but that didn’t happen… “Some vaccines use aborted fetal cells… Infringement on parental rights is so outrageous.”

A woman said she wants to get the community more informed on the vaccine issue. The Senator told her to sign up for his newsletter and to list issues important to her. He mentioned, “If vaccines were sent to people who need it most, I would support it. I think that 277 was good; it woke a lot of people up.” However, those on the other side of the issue don’t understand the language of the bill when they read off their talking points.

Another man said he knows a woman who has two sons, and one of them has had issues with all vaccines. Anderson said that she has to work it out with the pediatrician. When he asked if there’s been any efforts to repeal, Anderson answered, “They tried a referendum, which has never worked. It fell short of signatures.”

Andrea Grube, a high school student, asked if high school teens can get vaccines without their parents’ permission. She knows some teens whose parents don’t allow their son or daughter to get vaccinated. Senator replied, “They’re minors. Unless they’re emancipated, they’re under their parents’ household.”

Andrew Hayes, one of the District representatives, told ECM that the Senator has had community coffees in Santee, El Cajon, La Mesa, and Spring Valley. There are normally 8-10 a year.

This was the Senator’s last community coffee this year. The coffees will start up again in 2016. The next big event is his Holiday Open House on December 10 this year.