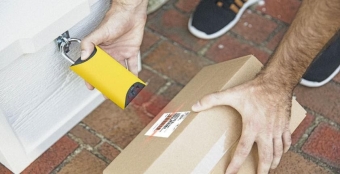 Stolen goods hurt the most vulnerable in our community
Source: Senator Brian Jones
Photo: CC by SA-NC via Bing
February 10, 2021; updated Feb. 14, 2021 (Sacramento) – California State Senator Brian W. Jones (R-Santee) has introduced Senate Bill 358, a measure to increase the penalties on persons who steal packages from the porch or entryway of someone's home.

“Because of the COVID-19 crisis, home delivery of goods has increased all across the nation. In particular, seniors and disabled Californians rely on package delivery for fundamental items such as medication and food,” stated Senator Jones. "Unfortunately, package theft continues to run rampant with the rise of home delivery services. This ‘porch piracy’ epidemic is serious and must be addressed by our criminal justice system. While current law is weak, this bill will ensure the punishment fits the crime."

Current law provides that a theft of a package from the porch or entryway of someone's home is merely a misdemeanor, no matter how many repeat convictions the perpetrator may have on their record, according to Jones.
SB 358 would allow prosecutors to charge the perpetrator ("porch pirate") with a misdemeanor or with a felony in the third or subsequent conviction during a 36-month period. This will increase the jail time for these thieves.
"Because current law treats package theft outside the home differently than burglaries inside the home, many of these porch pirates are habitual offenders who keep dodging real punishment for their crimes," continued Jones. “In addition to driving up the price for all consumers, porch piracy leaves the most vulnerable in our community without essential items that many need to survive."
SB 358 is awaiting assignment to a Senate policy committee for a hearing.
A similar bill last year falied to make it out of the Senate's Public Safety Committee.
That measure was supported by the California State Sheriff's Association, which stated, “Increasingly, criminals have been stealing packages delivered at the doorsteps of homes. Because these package contents are often valued under the $950 grand theft threshold or the offender may not actually enter the dwelling to complete the act, individuals engaging in this criminal activity are generally not subject to significant punishment that could deter them from engaging in this activity.”
It was oposed by the American Civil Liberties Union (ACLU). The ACLU feared that the bill coud be applied in a discriminatory manner.  The ACLU also contended that there there are other laws that could be applied including trespassing, recept of stolen property, mail theft, and  attemped petty theft or grand theft, depending on the value of items stolen, the Sacramento Bee reports.

"In particular, seniors and disabled Californians rely on package delivery for fundamental items such as medication and food,” stated Senator Jones." Why would it take THREE thefts of medicine to make porch piracy a felony? Methinks the bill was watered down to get votes.
These people have nothing to loose and are hardly ever cought.

& other security cameras. Neigbors are posting photos to warn others on social media and turning them over to police.