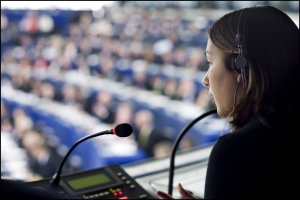 “Arbitrary” legislation last year undermines entire industry that helps people with hearing, language challenges, Jones says
East County News Service
Photo: CC by ND – via Bing
February 20, 2020 (Sacramento) - State Senator Brian Jones (R-Santee) announced today he is joint-authoring Senate Bill 875 along with Senate Republican Leader Shannon Grove (R-Bakersfield).  SB 875 will exempt interpreters and translators from Assembly Bill 5, which went into effect on January 1 of this year.
AB 5, by Assemblymember Lorena Gonzalez-Fletcher (D-San Diego), is forcing thousands of independent contractors to become formal employees of a business. Intended to crack down on abuses by big companies such as Uber and Lyft, the new law “has been a boon to union leaders but horrible for California's economy, workers, and businesses,” according to a press release issued by Jones.” AB 5 is particularly harmful to businesses owned by women and persons of color, who prior to AB 5 were winning in the California economy.“
Interpreters and translators work in a woman-dominated profession according to a recent Forbes article which describes the difficulties AB 5 is posing for these hard-working entrepreneurs.
"Interpreters and translators help some of the most vulnerable people in California," stated Senator Jones.  "These service providers are often out on the road working a variable schedule.  They are clearly much more of a contractor rather than employee, yet the arbitrary nature of AB 5 has boxed them in.  If Democrat legislators and Governor Newsom care about hard-working families, they should support measures such as our SB 875."
The law has sparked lawsuits by freelance journalists, photographers and truckers.
Other measures have been introduced seeking to exempt musicians and some other occupations that have been particularly hard-hit by AB 5.