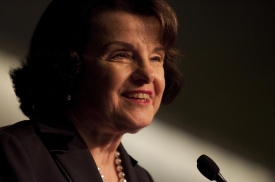 February 20, 2012 (San Diego)--Last weekend at the Democratic State Convention, Senator Dianne Feinstein discussed her agenda for Congress as well as her aspirations for the United States.  The Senator, who has served for 20 years, seeks reelction in November.

“First, there would be affordable access to healthcare,” she explained. “Second, prudent and strong regulation of financial institutions, so that American consumers get a fair trade when buying a home, investing hard earned money in a college fund or saving for retirement. Third, we need the protection of Medicare, social security and a social security net. We need to protect a woman’s right to choose.”

In addition, she called for immigration reform. “Newcomers and immigrants are vital to our economy,” the Senator noted. “Through their hard work, we must ensure that they can come out of the shadows with dignity.”

She also expressed support for public education. “We must find a way to invest in both K-12 and university education.,” she added.

Senator Feinstein also discussed some of the problems plaguing homeowners. “Just last year, we had 428,000 foreclosure notices sent to California families. This is a human tragedy. I know from stories I’ve heard what it means to someone whose home is their prized possession and the center of family life. To lose it and have to walk away is devastating.” She stated. “Dealing with the housing market is one of the highest priorities of this Congress.”

Feinstein spoke about a new bill she helped initiate in Congress called the Due Process Granted Act. “This bill will ensure that no American can be picked up, detained or held without trial or charge,” she explained.

In addition, she discussed Proposition 8 and the Defense of Marriage Act. “We had a tremendous victory for fairness when the ninth circuit found proposition 8 violated basic rights. Sixteen years ago, I was one of only 14 Senators who voted no on the so-called Defense of Marriage Act, also known as DOMA,” she recalled. “Now, recently, I introduced a bill to strike DOMA from federal law, and with that, give back the 1100 rights that DOMA has very cleverly taken away from tens of thousands of legally married same-sex couples, including 18,000 who were married in California before Proposition 8 passed. We intend to fight this and continue this fight until DOMA is no longer the law of the land and until same-sex marriage is legal and all couples are entitled to those rights.”

Feinstein next addressed the high unemployment rates throughout the United States, and specifically California. “With Governor Brown in Sacramento, we’re treading in the right direction. But as the governor will tell you, too many Californians still cannot find work. In our state, we have more than two million of our neighbors out of work, on unemployment, according to the labor department. I’d like to see Congress pass and the president sign an extension of the payroll taxes through 2012. This is really critical because it’s going to put $1000 in the pockets of 17 million Californians, and that’s not too shabby.”

Feinstein concluded her luncheon speech to delegates by detailing necessary steps to fix infrastructure by investing in a natural infrastructure bank to “modernize our roads, airports and waterways and put hundreds of thousands of construction workers back to work. Our ports need updating, our rail system needs updating, our highways need updating.”

She concluded, “There is a lot to do, but I’m ready for the challenge.”