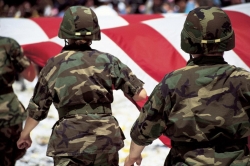 Bill would allow some court-martialed soldiers to appeal to U.S. Supreme Court

October 7, 2011 (Washington D.C.) – The words on the United States Supreme Court building read “Equal Justice Under Law.” Yet some service members are denied access to the nation’s highest court. To correct what they believe is an inequity in the military justice system, Senator Dianne Feinstein (D-CA) and Congresswoman Susan Davis (D-San Diego) introduced legislation to grant these service members access to the Supreme Court.

Furthermore, the bill would allow the Supreme Court discretionary review of certain cases, a provision supported by the American Bar Association.

“U.S. service personnel place their lives on the line in defense of American rights every day, but are deprived of one fundamental right-- the ability to petition our nation's highest court for direct relief,” said Senator Feinstein. “This is a right given to common criminals in our civilian courts, to the government, and to some terrorists prosecuted as war criminals. It is long past time we give U.S. service members the same rights as the American citizens they fight to protect.”

“This is a simple matter of fairness,” said Davis, a member of the House Armed Services Committee. “We ask our men and women in uniform to support and defend our Constitution, which guarantees due process, yet we deny some of them that process. The disparity with which defendants and the government are treated under the current law is an inequity that should be rectified.”

Congress created a separate criminal justice system for our Armed Forces, which is governed by the Uniform Code of Military Justice (UCMJ). The UCMJ provides that criminal charges against members of the Armed Forces will be tried before courts-martial and further provides for the review of court-martial judgments by a series of military courts and officials.