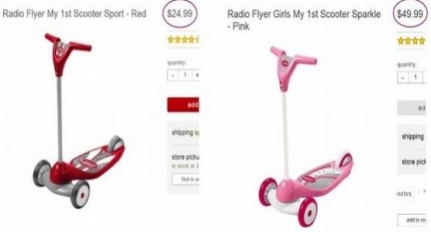 April 17, 2016 (San Diego) — California women and girls are spending $41 billion  more than men and boys for similar products that everyone needs, according to the Senate Judiciary Committee analysis of Senate Bill 899, the “Equal Gender Pricing Bill” authored by Senator Ben Hueso (D-San Diego).  Yet they earn $39 billion less than men each year.


Just in time for Equal Pay Day last week, the Senate Bill 899 passed the Senate Judiciary Committee by a 5-1 vote.  California law already prohibits gender price disparity in services such as haircuts or dry cleaning.  Hueso’s bill would extend those productions to pricing of most consumer products (except food).  The bill to eliminate the “pink tax” is coauthored by San Diego Assemblywoman Lorena Gonzalez and sponsored by the Consumer Federation of America.  The new bill would also require retailers to post signs informing consumers of their rights to equal pricing for similar products.

Hueso calls that pricing gap “unfair.”  He asks, “Why are retailers pulling extra money from women when data already shows that they earn about 84 cents for every dollar men earn?”  For minority women the wage gap is even worse; Latinas and African-American women earn just 43 cents and 63 cents respectively for every dollar that men receive in wages.

Sometimes the pricing disparity is huge.   Scooters sold online at Target that were identical except for color cost $24.99 for a red version labeled for boys yet double the price--$49.99 for pink, according to a December 2015 New York City Department of Consumer Affairs study titled “From Cradle to Cane: The Cost of Being a Female Consumer.”

Personal care products for girls and women were priced 13% higher on average than similar items for boys and men, with shampoos 48% more.  Toys were 7% more for girls, while girls’ clothing cost 4% more.  Senior care and home health products for seniors ran 8% more for women – sometimes a lot more.  Urinals for incontinent women ran 21% higher than men’s, while supports and braces for joints or backs ran 15% more for women, in what the study described as “brazen” differences. Women paid more in 20 out of 25 categories studied.

The New York study findings corroborate findings in 1994 by the California Assembly Committee on Consumer Protection, Governmental Efficiency and Economic Development that “adult women effectively pay a gender tax which costs each woman approximately $1,351 annually, or about $15 billion for all women in California.”  Part of that gap was eliminated by the Gender Tax Repeal Act on services, but not for consumer products, which Hueso’s bill seeks to address.

For now, women seeking to save money may wish to heed the advice of a Washington Post article recently published was titled “Why you should always buy the men’s version of almost anything.”

“All consumers, regardless of their gender, should pay the same price for the same products. Pink packaging or gender-based marketing is no justification for charging more, says Richard Holober, executive director of Consumer Federation of California. “Anything less than an equal price is discrimination and blatantly unfair.”

The California Chamber of Commerce named the bill to its annual list of “job killer” measures, stating on its website that SB 899 “drives up consumer costs and increases frivolous litigation similar to the disability access lawsuits in California, by prohibiting a retailer or grocery store from discriminating against a person on the basis of gender with the price of goods and subjecting them to a minimum $4,000 of damages for each violation.” (Damages would be limited to a maximum of triple the damages.)

Opponents contend the bill would cause increased litigation against companies and increased costs for businesses. Some argue that retailers might simply raise prices for all products rather than lowering prices on goods for women.

The California Retailers Association contends that price differences could be due to higher costs of package design, development or marketing for certain women’s products and that size differences can lead to cost differences in materials for items such as clothing.  The bill would also force retailers to change prices nationwide on national retail sites, for example. Some also argued that the bill lacked clarity on just what would constitute similar products.

Hueso introduced amendments that clarified companies could charge more if there were legitimate differences in costs of labor, materials, or tariffs and that “substantially similar” means the products are of the same brand, share the same functional components, and share 90% of the same materials and ingredients. The amendment also eliminated food products from the bill.

the 84 cents lie is just that a lie. maybe hueso needs a class on sobriety

all "high maintenance" jokes to the trash barrel. . . .Is nothing sacred?