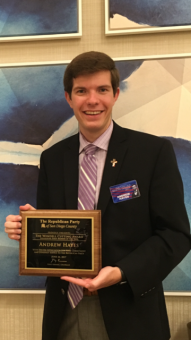 “It was a total surprise when I heard my name called,” said Hayes. “It’s an honor to support Senator Anderson’s top priority to make government work for our constituents. We are always open to hearing directly from local residents, about their concerns and ideas for improving state government.”

The dinner, held June 24 and organized by the Republican Party of San Diego County, drew more than 770 attendees, making it one of the largest Republican dinners outside of Washington, D.C.

A native of Lakeside, Hayes graduated from El Capitan High School (class of 2012) and then attended the University of San Diego where he earned two bachelor’s degrees, one in political science and a second in business administration. He joined Anderson’s staff as an intern in March 2014 and was hired as a legislative staff member in January 2015.