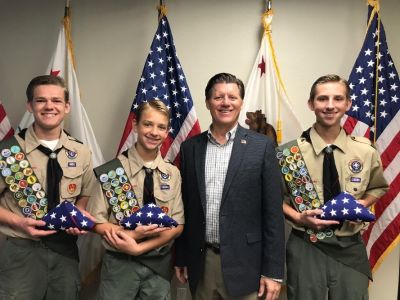 "These three young men are an inspiration to our community and positive sign that our future is in good hands," stated Senator Brian Jones.  "Jacob, Joshua and Noah's spirit of public service is commendable and appreciated by all.  We are grateful to the Epperson family, their friends and neighbors who are helping guide these three young men so well."

Jacob, Joshua and Noah Epperson of La Mesa all received their National Eagle Scout designation on the same day - October 24, a rare occurrence in the Scouting World.  The rank of National Eagle Scout is the highest and most prestigious award in the Boy Scouts of America (BSA) organization and is achieved by only 4% of Boy Scouts.

One of the final requirements to earn the Eagle Scout rank is completion of a community project.  Jacob's project added trail markers and distances at Hillside Park in El Cajon, Joshua's was to install a concrete pad around an existing flagpole at the family's house of worship, The Church of Jesus Christ of Latter-day Saints in La Mesa and Noah's was installing a bulletin board kiosk at MacArthur Park in La Mesa.

The secret to the Epperson boys' success was camaraderie, not competitiveness.

The boys are sons of Troop 370 Scoutmaster Dirk Epperson (also an Eagle Scout since 1994). Earlier this year, they decided to go through the program's Boards of Review together. Jacob started his project in February and was on track to complete his Eagle requirements quickly, but waited until his younger brothers could join him for the honors.

"You don't hear about three brothers getting Eagles the same day so it was a cool experience for that," Jacob said. "It was fun helping each other during the process to be able to go through it together."

The boys said they were also assisted by about 30 other people, including their parents, relatives, neighbors, other Scouts and friends. The three projects combined for over 400 hours of benefit to the community.

"I kind of feel relieved and proud to be able to accomplish something so useful," Noah said.

Even their little sister, 11-year-old Chloe, was part of the mix, picking up trash, bringing water to thirsty workers and providing babysitting duties to helpers with children.

The three brothers will be awarded the Eagle Scout rank at a Court of Honor scheduled for Monday, Dec. 2 at their church -- with the flag flying on its new flagpole.

"I'm really proud whenever I walk over there and raise the flag now," Joshua said.