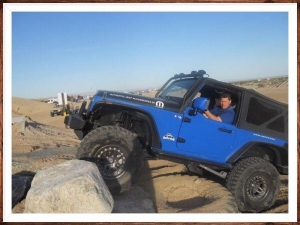 “SB 227 had another successful committee hearing with more bipartisan backing for our efforts, this time from the members of the Senate Natural Resources & Water Committee,” said Senator Brian W. Jones. “We’ve worked hard for the past two years with OHV stakeholders and affected governmental agencies, including State Parks and the Air Resources Board. SB 227 is a true consensus measure that will allow OHV competitions to continue operating and being a strong part of the recreational economies in rural and suburban California.”

Competition OHVs have long been registered through the Red Sticker program under the California Air Resources Board (CARB). This program has allowed competition off-highway vehicles to operate in the state for the past two decades.

However, the Red Sticker program is set to end this year with no plan to replace it.  Without a new program, off-highway vehicle competitions and practice riding on public lands will be put to an end in California at a great loss to local businesses, competitors, and a storied tradition of competition. Importantly, funding for environmental work and law enforcement will also be lost.  SB 227 creates a new, off-highway vehicle identification program under California Department of Parks and Recreation that is narrowly tailored for legitimate competitors only.

SB 227 is a reintroduction of Jones’s SB 1024 from last session, which was on the verge of a Senate concurrence vote when the legislative session adjourned at midnight on August 31, 2020. SB 227 is a bipartisan measure coauthored by Senators Ben Hueso (D-San Diego), Melissa Hurtado (D-Fresno), and Brian Dahle (R-Bieber), and Assemblymembers Jim Frazier (D-Fairfield), Adam Gray (D-Merced), James Ramos (D-Highland) and Thurston Smith (R-Hesperia).

According to the bill analysis provided for the Senate Natural Resources & Water Committee, the bill is opposed by the American Lung Association and by a coalition of environmental groups.

The American Lung Association opposes the measure because it “would interfere with expected pollution reductions from emissions non-compliant off-highway vehicles… 98 percent of Californians live in communities impacted by unhealthy air. The transportation sector is the dominate source of our air pollution burdens, as well as the leading source of carbon pollution in the state.”

Environmental groups including the Coalition for Clean Air, Natural Resources Defense Council, Sierra Club California, and Union of Concerned Scientists,  contend that the bill is unnecessary since current regulations allow the use of emissions non-compliant OHVs for practice and competition on public tracks. The environmentalists also argue that  there are emissions-compliant OHVs available for purchase and the state should not discourage the sale or development of cleaner vehicles by allowing for continued purchase and use of noncompliant OHVs.

The measure earlier passed the Senate Transportation on a 12-2 vote, with 3 members not voting.

SB 227 is cosponsored by the Coalition for Public Access and the California Motorcycle Dealers Association and goes next to the Senate Appropriations Committee for hearing.