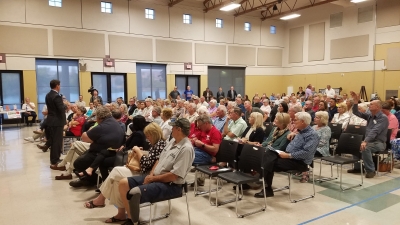 After being introduced by Lakeside School District Board Trustee Andrew Hayes, Jones quickly jumped into the concerns of local residents.

Jones said that during this past legislative season, the California Senate voted on some 3,000 bills, of which 1,200 were submitted to Governor Gavin Newsom for his signature or veto. 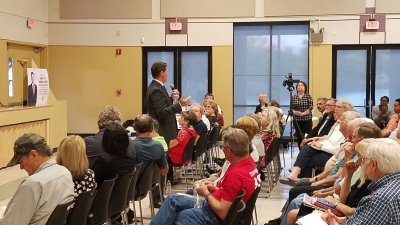 “Historically, when Brown was governor, some 900 to 1,200 bills would make it to his desk and he would veto from 20-to-30 percent,” said Jones, adding that around 700 bills each year would become law.

In his first year as Governor, with a Oct. 13 deadline looming, Newsom has already exercised his veto pen on a good number of bills.

“Hopefully some of the worst bills will have died before they reach his desk,” Jones said.

Before opening the floor to citizens, Jones briefly addressed the question of major insurance companies canceling homeowners’ insurance policies due to wildfire risk.

“Many of the calls I’ve received from constituents have been about the insurance companies canceling policies in high fire hazard areas,” said Jones. “This is taking its toll and bringing anxiety to many families.”

Legislative options are limited, he noted. “At this point the legislature does not have any authority to dictate policy to a private company. So lawmakers, ratepayers, and stakeholders – all of us are coming together to see what we can do to change this situation.” 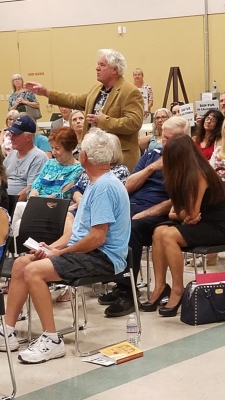 Jones urged constituents to continue contacting his office by phone and e-mail if they are facing such a situation. (Click here for Sen. Jones’ office website.)

Recently, two of Sen. Jones’ bills were signed into law.

Senate Bill 557, sponsored by the California Judges Association, requires information revealed through competency hearings to be confidential, unless a judge believes it to be beneficial to the public to release. Competency hearings often reveal sensitive medical information that would be subject to strict privacy laws in any other setting. The measure aims to protect the mental and physical health records of individuals that are subject to these hearings.

On the subject of the new multi-cultural state diversity curriculum being considered by the state Department of Education, Jones said that the State Assembly and Senate Jewish caucus are upset over the curriculum’s handling of the Holocaust and history of immigration of Jews to the United States.

Jones then brought up the new state sex education curriculum up for approval by the state. “I’m not going to go into the details about it tonight because some of it is inappropriate and disgusting,” he said. He encouraged citizens to become aware of the issue and directed them to check out the health education framework on the department’s website.

“My suggestion is to take your kids out of public schools,” the conservative legislator stated.

As for his vote against the abolition of fur sales in the state, Jones said he felt compelled to vote no due to concern about certain ethnic communities in Los Angeles, who would suffer economic strain if such a ban was enacted.