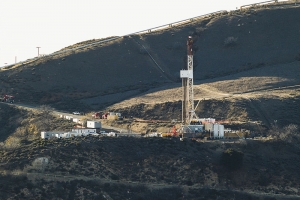 Amendment would direct energy secretary to lead federal review of cause and response to the crisis, make recommendations to solve the gas leak that has forced 3,000 families to evacuate, and prevent future incidents

January 29, 2016 (Washington D.C.) — California Senators Barbara Boxer and Dianne Feinstein announced Friday that they will introduce an amendment next week to energy legislation currently on the Senate floor. The amendment would direct Energy Secretary Ernest Moniz to lead a broad federal review of the cause and response to the natural gas leak at Southern California Gas Company’s Aliso Canyon Natural Gas Storage Facility – including making recommendations on immediate steps that could assist in solving this gas leak and in preventing and responding to future incidents.

Under the amendment, Secretary Moniz would lead a six-member intergovernmental task force in probing the Aliso Canyon gas leak – including the impacts on surrounding communities and the environment – and issue findings within six months, with interim reports as necessary to respond to the leak. In addition to the Energy Department, the task force would include representatives from the Pipeline and Hazardous Materials Safety Administration, the Department of Health and Human Services, the Environmental Protection Agency, the Department of Commerce and the Department of Interior.

“It has been very frustrating to watch this Aliso Canyon crisis‎ unfold – almost in slow motion – without any clear remedy,” Senator Boxer said. “It is time to put our brightest minds to work to analyze and make recommendations that would not only assist in Aliso Canyon, but would also help us prevent and respond to similar incidents across the country.”

“What’s happening at Aliso Canyon is a very serious event, forcing the relocation of more than 3,000 families. We have a responsibility not only to address this leak, but also to ensure nothing like this ever happens again,” Senator Feinstein said. “This amendment, which directs the government to look at the cause of the leak and the response, will provide valuable lessons on how we can keep communities all around the country safe from similar situations.”

The amendment includes language directing the task force to review and issue recommendations on whether to continue operations at Aliso Canyon and other facilities in close proximity to residential populations based on an assessment of the risk of a future natural gas leak.

On October 23, 2015, a leak was discovered at the Aliso Canyon facility, which has released major quantities of methane, a powerful greenhouse gas – more than 84 million kilograms, the equivalent of 2.1 million metric tons of carbon dioxide or more greenhouse gas than 440,000 cars emit in a year.

Attempts by the Southern California Gas Company to stop the leak have not been successful, and many residents in the nearby community have reported adverse physical symptoms including dizziness, nausea and nosebleeds. The continuing emissions from the leak have resulted in the relocation of thousands of people away from their homes and livelihoods, the closure of local schools, and negative impacts on many businesses in the area.

On January 13, Senators Boxer and Feinstein sent a letter to the Department of Transportation, the Environmental Protection Agency, and the Department of Justice calling on these agencies to assist the State of California in responding to the Aliso Canyon gas leak.

Text of the letter can be found here.