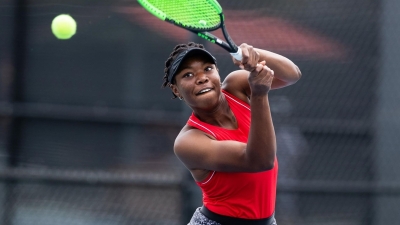 SDSU improved to 10-4 overall and is 2-0 in Mountain West Conference play for the first time since 2014. The Aggies fell to 5-6 overall and 0-2 in league action.

The Aztecs posted their third sweep in the last five days, outscoring Dartmouth, Boise State and Utah State by a combined 12-0, and now has seven shutout victories this season.

“We were able to send off our three seniors in style for their last home match,” San Diego State head coach Peter Mattera said. “We really wanted to make sure we took care of business today and make this a day to remember. Fittingly, two of our seniors, Nnena and Regin, decided the doubles point at number two and Nnena was the match decider in singles.”

SDSU’s powerhouse at the top of the doubles lineup quickly put the Aztecs in position to earn that point. Seniors Bunyawi Thamchaiwat and Tamara Arnold, both of whom plan to return for the Aztecs next season and did not participate in senior ceremonies, were first off, posting a 6-0 win over Sidnee Lavatai and Gabrielle Dekkers. The Aztec duo, ranked 51st nationally, is now 11-2 on the campaign and have accounted for 11 of 25 team doubles victories in 2022.

After Utah State knotted the doubles tally at one each with a victory at number three, it was up to two Aztecs who were playing their final competitive home matches to come through. Nadozie and Pitts posted a 6-4 victory on court two to give SDSU the team point and a 1-0 lead.

The Aztecs have won the doubles point in four consecutive matches and 11 times in 14 matches this season.

SDSU’s dominant singles play continued Sunday. The Aztecs did not drop a set in the three matches needed to clinch the team victory, and won the first set in the three other matches that were not played to conclusion because the team win was secure.

First off in singles action was Arnold on court two. Arnold, who joined Nadozie as one of two Aztec players to post singles and doubles victories on Sunday, was a 6-1, 6-2 victor over Lisa Küng. It was a team-high tying 10th singles victory for Arnold who has posted wins for the Aztecs in each of their last five matches. The win gave San Diego State a 2-0 advantage in the team score.

On court five, Alicia Melosch defeated Annaliese County, 6-2, 7-5. The senior who plans to return for the Aztecs next season also has 10 singles victories this season, improved to 10-2 and has victories in five consecutive matches.

But the clincher came by a senior who was playing at the Aztec Tennis Center for the final time. Nadozie, who earlier helped the Aztecs secure the doubles point, gave SDSU the walkoff win with a 6-2, 6-3 victory over Naz Ozturk on court three. A native of Los Angeles, Nadozie won her second straight match and is unbeaten in her last four outings.

SDSU’s other senior playing in her home finale, Rimoldi Godoy, owned a 6-2, 5-3 advantage at number six singles when the team victory was secured and the match was halted.

San Diego State looks to remain perfect in Mountain West Conference play when the Aztecs travel to Fresno, Calif. For a pair of matches. SDSU will face San José State on Saturday at 10 a.m. before battling the host school, Fresno State, on Sunday at 2 p.m.