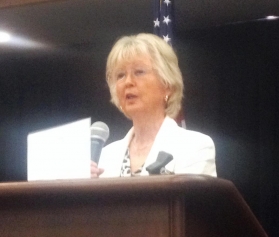 September 27, 2015 (El Cajon)- At the Ronald Reagan Community Center in El Cajon last Wednesday, County Supervisor Dianne Jacob hosted a ‘Don’t Get Hooked’ event, geared towards seniors and caregivers. Seniors learned the common types of fraud/scams and how not to get reeled in. They also heard some real life stories of how some elderly people got caught in a scam and the results.

Jacob teamed up with District Attorney Bonnie Dumanis to organize this event and bring more attention to this issue as well as offer advice. Seniors are most targeted because they are trusting.

“Our goal today is not to get scammed,” Jacob stated, adding that scammers reach out in email, snail mail, and on the telephone.  She advised, “If you don’t know who the person is on the other end of the line, don’t answer it. Let it go to an answering machine or hang up. Delete email or shred junk mail.”

She then talked about how she got scammed on the computer through an advertisement which claimed they could ‘help’ her. When she called the number listed, the person led her through a list of steps to get into her computer. She then refused. “How can you tell her if you’ve been scammed? You never really know. They may sound friendly,” Jacob added.

After thanking Dumanis for partnering up with her, SDCCU for providing the free lunch, and the city of El Cajon for the use of the community center, she introduced Perkins, the first speaker.

Perkins stated, “Today we’re talking about fraud.” She said scammers use various schemes such as telling seniors their grandson is in jail and to get money from CVS.  Another type of fraud is claiming you owe taxes and need to pay a fee over the phone. “There’s also the lottery scam,” Perkins continued.

She advised that sheriff’s officials don’t call when someone has an outstanding warrant, but seniors have gotten calls from people claiming to be from the sheriff’s office.

Perkins then talked about why she’s been in her line of work. “It’s very satisfying when criminals go to jail.” She talked about a personal experience in which her dad’s obituary was listed in the newspaper and on the Internet. Her mother was scammed when scammers found the obituary online. “My mom was flooded with calls.” Perkins then educated her mom about scammers and to just hang up.

A couple videos were shown of elderly people falling for the scam, including Father Michael Ortiz from San Diego. Unfortunately, after he had sent money after a letter claimed he would get more money, the Sheriff’s department couldn’t get his money back.

Perkins advised seniors to talk to other people and ask questions. In closing, Perkins talked about how her partner gave a presentation last week and showed a picture of water buffalo and a lion lying under a tree nearby. He told the audience that they were the water buffalo and they need to educate their family and friends about the lion (scammers) out there.

Banaga, assistant division chief, talked about real estate fraud. “On occasion, we have people come to our office recording transferring of property from one person to another. If you receive that bill and another person’s name is on it, come to the office to make sure you’re on the title of the property.” Also, if there’s any loans you don’t recognize or a deceased person’s signature is on it, come to the office.

Greenblat, who works for Dumanis, gave some tips about to keep seniors safe from fraud. “We’re involved in an uphill battle. Elder abuse is a crime going unpunished. You can help us break the silence.” Seniors have been too ashamed or embarrassed to talk about how they fell for a scam.  There have been cases where an elderly woman’s son physically abuses his mom and tries to take money.

He offered 10 tips he compiled over the last 20 years he has been in his line of work that could best help seniors:

1) Choose a caregiver with caution. Don’t hire through Craigslist or the newspaper ad. Get a background check from the agency the caregiver is from. There have been problems with caregivers abusing or killing the seniors.

2) Scammers are most likely to steal women’s jewelry. Keep an inventory of it. Lock the drawers. Have a photo or video of valuables and sentimental pieces.

3) Shred everything that has your name, address and personal information on it, so no one will steal your identity.

4) Protect incoming and outgoing mail. There have been mailbox thieves. Never allow incoming mail to sit in an unsecured mailbox with public access. Consider renting a PO Box if you have an unlocked mailbox.

5) Obtain a credit search at least 2-3 times a year. By law, a person can get one free credit search a year through Experian, Equinox, and TransUnion. You can consider freezing your credit, and talk to banks about credit searches.

6) Have caller ID. Determine if the call if private or unknown, and be on guard. Don’t be afraid to hang up and let it go to a message machine. Crooks don’t leave messages. For annoying telemarketers, have a whistle ready to blow at the telemarketer.

7) You will never win a foreign lottery. Don’t believe the mail, email or call. People keep falling for this. The frustration is not being able to get the money back to the victim. Also, don’t believe the IRS and Pepsi when a letter is received about winning the sweepstakes. Avoid the Grandma scam on the phone when someone claims that their grandchild is in trouble, and the crook asks the grandmother to obtain a green dot card or ITunes etc.

8) Have a copy of your bank statement send to a trusted financial advisor if the senior is blind.

9) Don’t assume the friendly handyman is licensed. Always check with BBB and State Licenses Contractors Board. Get 3 estimates, insist on a written contract, get photographs of the work he does, and never pay more than 10% of the contract price up front.

10) Always have a second line of defense at the front door, like a locked screen door or a security chain guard. Never allow a stranger in your home even if the emergency seems real. Instead, tell the person you will call 9-1-1.

Greenblat talked about Natalie ‘Sandy’ Vinge of La Mesa, who was beaten and held in her car for 26 hours. In December 2008, a crook offered to sell her a vacuum at her house. The crook then choked her, beat her, and held her hostage in the trunk of her car.

Vinge shared this advice. “I don’t let anybody I don’t know in my house. Ladies, be careful of men out there.”

1) Don’t leave a purse in a shopping cart.

2) When traveling, don’t put your home address on your luggage label. Consider putting someone else’s address. Don’t get picked up at home by a cab; the cabdriver will find out you’ll be on vacation.

3) If someone offers to update a living return or give a better return for investments, be careful.

Some questions were asked from the audience. They submitted it on a notecard and Jacob read them aloud. Here are some of the questions and responses.

How many scams happen over the phone, what percentage of those cases can be prosecuted? Greenblat said scammers usually call from Canada, Jamaica, Europe, or West Africa. The victim’s money is quickly dispersed, unfortunately.

How do you know it’s a scam call if someone claiming to be from the police or fire department calls? Perkins said the best thing to do is to verify. “Have someone you trust make phone calls for you if you’re not able to.”

Could someone get the victim’s name off another person’s computer? Morales said people get scammed through Facebook because they are tagged in a person’s photo. The best thing to do is to not be tagged in a photo, so no one find out your name, or not be in any pictures on social media.

Who should you report a scam to? Perkins said you can call your local agency or 9-1-1 if a stranger is at your door. Levine from Elder Law and Advocacy said a person can call them if they get an email they don’t recognize. Elder Law can look into where the email is from, and see if the organization has any complaints. Morales said they can call Adult Protective Services, and they would be able to assist the individual to find out where they need to go. They also educate about scams.

How does the crook know about an older woman living alone? Greenblat said crooks target older ladies with the names, such as Eleanor, Agnes, Dolores, and Gertrude. They also look for or buy magazine subscriptions with people’s names on it. They also go through the phone book randomly to see who they can target.

Can you get a trust at no cost? Levine said he doesn’t know where that can happen. Elder Law refers the senior to a professional and trusted attorney. Also, having a survey from the ‘census’ isn’t uncommon either; that’s another scam.

What happens if you’re driving alone and a Sheriff deputy is behind you with flashing lights? Should you stop? Perkins said you can pull into a well lit area, like a gas station, and the crook will drive away. Someone else wondered if you could be arrested for not stopping if it really was a law enforcement officer. Perkins said probably not if you’re going at a safe speed and you tell the officer why you didn’t stop.

Should you put your trust information on your checks? Greenblat advised seniors to just put their first initial and last name without any other personal information.

The speakers then gave seniors some last pieces of advice.

Morales said seniors can report to Adult Protective Services if they’re scammed. The senior will get a referral. Another common scam is someone calling, claiming to be from Microsoft and they discover a virus in the victim’s computer. After helping you get the virus out, they ask for a credit card number and payment directly over the phone. Adult Protective Services follows up with the individual and provides temporary case management.

Levine said, “Be herring on the side of skepticism. No one gives out money for free.” Also, if the senior keeps answering the phone, the crook will keep calling and you’ll be a target.

Banaga said seniors can come to any of their branches in San Diego and they can get a copy of their last recorded document to see who’s on file.

Perkins said there would always be crime out there, but “you don’t always have to be a victim. Please be careful.”

Jacob concluded the event and thanked the speakers, and everyone else for coming.

Read more of Father Michael and the scam he got into here: http://www.sandiegouniontribune.com/news/2014/oct/09/publishers-clearinghouse-sweepstakes-scam-priest/.

To hear Vigne’s story, watch the video at:  http://www.cbs8.com/story/15615431/sandy-vinge-advice-to-avoid-being-a-victim-of-crime.

Adult Protective Services can be reached at 1-800-510-2020. (http://www.sandiegocounty.gov/hhsa/programs/ais/adult_protective_services/index.html).

Here’s a copy of the ‘Don’t Get Hooked’ booklet: http://www.sdcda.org/helping/dont-get-hooked.pdf.

Visit the district attorney’s website for more information about crimes and frauds: http://www.sdcda.org/