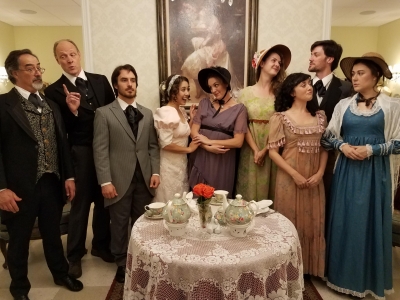 November 7, 2019 (Escondido) - Fun is probably not the word that comes to mind when you think of Jane Austen, but her genres are listed as romance novels and comedy of manners on Google. Jane Austen is known for writing six novels. Sense and Sensibility is her first novel, written in 1811, followed by Pride and Prejudice in 1813, Mansfield Park in 1914, Emma in 1815 and Persuasion and Northanger Abbey in 1817.

This production of Sense and Sensibility by Kate Hamill, based on the Jane Austen novel and directed by Kelli Harless is fresh, funny and just plain fun. If you are in the Escondido area, make your way over to the Patio Playhouse. If you are in the East County, this makes a nice Sunday drive. The show is worth the effort. 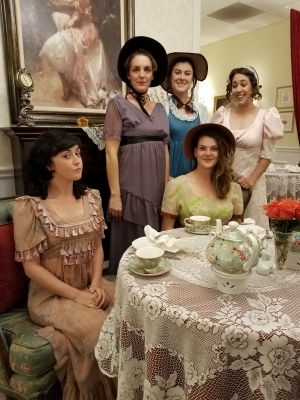 Sense & Sensibility follows the three Dashwood sisters and their mother after the death of the father and husband. It takes place in the 1790s in England at the Dashwood home, Norland Park in Sussex, Barton Cottage in Devonshire, London and Cleveland in Somerset. When Mr. Dashwood passes away, he asks his son from another mother to take care of his wife and daughters. In those days, the single most important issue for women was lack of fortune. They could not inherit. In this story, the son is influenced by his wife not to give them money, but to help them physically. The move into a house owned by an uncle in the country.

The focus, however, is on romance. Elinor Dashwood falls for a man before she leaves for the country. Both have conflicts.  Elinor turns out to be engaged and Marianne Dashwood is a scoundrel.

Ten actors take on all the roles. The two leads, Tori Bleher as Elinor and Maisy Holmes as Marianne have single roles in which they excel, but the other eight all take on several roles, which truly showcases their talents. My two favorites were Martie Clark as Mrs. Dashwood; she was the epitome of a mom you would want back in the day. Also Becca Pilcher as Fanny Dashwood; her roles were so varied and she rocked them all. Rounding out the cast were Daniel Cook, Guy Cook, Spencer Farmer, Amy Hypnarowski, Jacob Painter and Steve Warrick, who was also fabulous as Mrs. Jennings. You could not ask for a more entertaining cast.

Their was a beautiful country landscape painted across the backset, with sort of a black box production. Everything they needed for the show was on the stage, Everyone was in constant motion rearranging the prop and making thing work. The costumes are exquisite. Shout out to Felicia Broschart who stepped in with less than a week to opening to fill the role of costumer.

For this show, Patio Playhouse is partnering with the San Diego Children’s Discovery Museum, which provides interactive hands-on exhibits and programs focused on science and art world cultures for over 100,00 visitors annually. You can donate in the lobby or visit their website www.sdcdm.org. 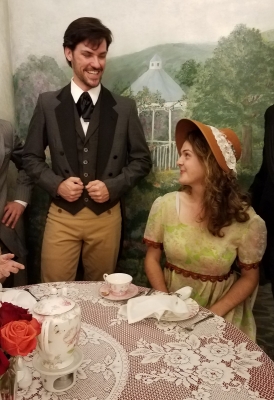 Miracle of the Season