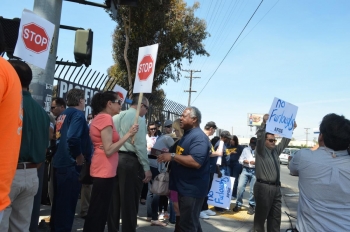 March 20, 2013 (San Diego)—Federal employees and their families at a rally outside the 32nd Street Naval Station today  came to bring attention to the effects of the federal sequester in their lives. This is a reality for them right now, not just a headline in a paper.

So how exactly will this affect East County residents in the near future?

ECM talked to Terry Shigg, Vice President of Local 1613 San Diego Border Patrol.  He said it is impossible to “have the same amount of coverage with less people."  Agents are expecting is a 40%  pay cut, he disclosed. 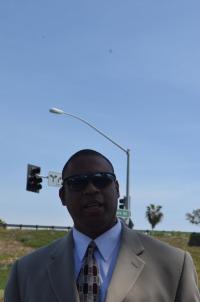 Border Patrol is facing furloughs and this will reduce their presence at the border. It has taken 10 years to build the Border Patrol to the point where arrests were at a historic low, but apprehensions are up,” Shigg said. “People don’t want to have that situation again when people used to cross the border with impunity.”

He added that the drug cartels know this. They “have intelligence and watch the media.”

He also said that the property values have gone up in the East County due to the increased security. Business has also been helped, but with this situation things will quickly degrade.

They are expecting things like increased drug runs, more illegal aliens coming through and most not Mexican nationals. They expect more tunneling and more human trafficking. This also posses a danger since terrorists will be able to come through much easier. Shigg closed by telling ECM that “it is about the security of the United States.”

ECM also talked to a woman who is married to a Border Patrol Agent who asked us not to use her name. Her husband was transferred to San Diego nine months ago. “We can’t stay here because 40% is almost half of our paycheck, and San Diego is expensive.”

“We hope it will work out. We live debt free, and we are the ones paying for it. To have our pay cut, when others have been responsible, it’s not fair.”

As ECM previously reported, Cal Fire might lose the air traffic control tower staff at the Ramona Airport entirely due to sequester cuts; the tower is critical for safety during air operations in the fire season.

Melissa Tovar works at the Child Development Center at the 32nd Street Naval Station. As she explained to ECM, while they don’t have how many days they officially will get furloughed, the average pay is $30,000 net. “It is a significant cut.”

It is bad enough that “some people may not be able to afford to come to work,” Tovar added. This comes on top of the last three years when the workers have had pay freezes. They also have flex employees who are not getting more than 30 hours, so they do not qualify for medical insurance under the health care law.

Before the protest, ECM talked with George Mccubbin, Vice President of the American Federation of Government Employees (AFGE) 12th District. He said that with the sequestration ,“federal employees are looking at an average 22 days of furlough, days off with no pay. This mea 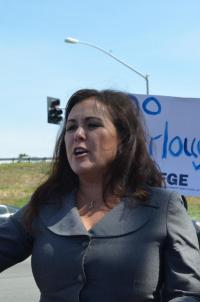 He added, “This will not only impact the employee, but also the community.”  San Diego is a large city, so the impact will be less, but in smaller communities the domino effect will have large effects in the surrounding communities, leading to business losses that result in job losses, for example around military bases.

Sequester cuts will also hit the Bureau of Prisons, the Border Patrol, Defense, Immigrations and Customs, the Social Security and the Veterans Administration, since Congress mandated across-the-board mandatory sequestration cuts across virtually all agencies.

Lorena Gonzalez, Secretary-Treasurer of the San Diego-Imperial Counties Labor Council,  emphasized to ECM that the effect are now expanding to civilian workers, such as NASSCO, and the longer it goes, the worst it will get.

Congressman Alan Grayson (FL-9th-D) said today that they are expecting upwards of 750,000 direct Federal Employees to lose their jobs, and 3 million overall.

Employees say that they want the Federal Government to stop picking their pockets. They believe it is time for other Americans to help solve the deficit. They say that they’ve  given as much as they can—around $680 billon over the last three years, according to Elizabeth Thornton, President of Local 1399 of the AFGE.