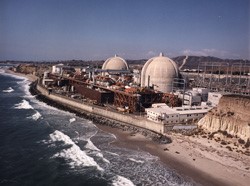 April 12, 2017 (San Onofre) – Just days before an April 14 court hearing filed by Citizens Oversight seeking to force removal of nuclear waste from storage along the ocean near the closed San Onofre power plant, Southern California Edison has agreed to enter into negotiations to move the nuclear storage elsewhere.

Both parties have asked for a postponement of the hearing in order to pursue a settlement agreement.  Attorneys Mike Aguirre and Maria Severson filed a stipulation on behalf of the plaintiffs and Edison, joined by the State Attorney General representing the California Coastal Commission.

Aguirre states, “People of good will must come together and work to find a solution that is in the best interests of the people of the state of California.”

Tom Palmisano, vice president and chief nuclear officer for Edison, the majority owner of the San Onofre facility, says, “We are hopeful that settlement discussions will permit the parties to reach a mutually agreeable solution.”

The suit was filed in November 2015 after the Coastal Commission granted Edison’s permit to expand dry cask storage of used nuclear fuel at San Onofre. One-third of San Onofre’s used fuel is currently in dry cask storage and the remaining two-thirds is currently stored in steel-lined concrete pools. Edison had proposed to move the fuel from the pools into dry storage by 2019, where it would remain until an off-site storage facility becomes available.

Citizens Oversight, a watchdog group founded by El Cajon resident Ray Lutz, has contended that the location is unsafe because over 8 million people live within 50 miles of the site, and because the canisters would be located just 100 feet from the ocean.  Plaintiffs argued that the canisters could leak or be damaged by saltwater, tsunamis or earthquakes, since the site is in an active earthquake zone.

Radioactive waste at the site will remain dangerous for thousands of years, yet the dry cask storage units are only certified by federal regulators for 20 years.

In addition to objections from environmentalists and area residents, a prayer vigil was also recently held on the beach near the plant by Native American activists who hope to see the wastes moved.

Edison and the state Coastal Commission tried to get Citizens Oversight’s lawsuit dismissed as without merit, but Superior Court Judge Hayes declined to dismiss it and set the April 14th hearing that both sides have now agreed to postpone while they seek to negotiate a settlement to move the nuclear wastes elsewhere and avoid a trial.

The reason that spent fuel rods from the nuclear plant at San Onofre have always been stored in cooling ponds on the site before the plant closed is because the federal government never approved a permanent national storage site.  Now, however, the Trump administration’s budget proposes $120 million for a permanent nuclear waste repository at Yucca Mountain in Nevada, offering one possible solution.

Edison closed down the San Onofre nuclear generations in January 2012 after radiation leaks from steam generators were detected, announcing permanent closure of the facility in June 2013.  After wastes are removed and the site fully decommissioned, the property will be turned over to the U.S. Navy.