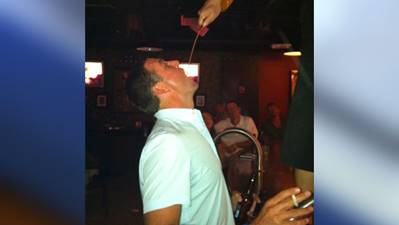 Photo:  former Rep. Hunter appearing to down a shot of alcohol in a Las Vegas bar.

March 11, 2020 (San Diego) - Duncan Hunter gave up his day in court, but prosecutors of the six-term Republican congressman laid out new evidence for his misuse of campaign funds in a mammoth data dump Tuesday accompanying their call for a 14-month prison term.

Among the revelations: Hunter may be working now for a Soviet-born defense contractor, and one of his alleged mistresses gave him the nickname Tristan Ludlow.

Prosecutors also suggest that Hunter — hammered for “throwing his wife under the bus” — actually had a point. 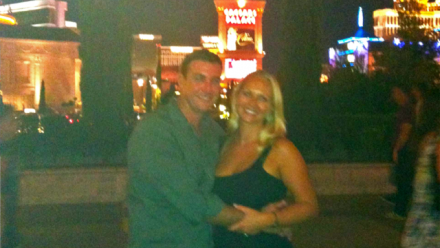 Photo, right:  Duncan and Margaret Hunter at Las Vegas weekend in August 2011, where they allegedly spent more than $2,000 in campaign funds. “In order to cover for this personal vacation, Hunter scheduled a pretext 20-minute ‘tour’ of a charter school,” prosecutors said.

“Margaret’s ceaseless theft of campaign funds” was often unknown to Hunter and his aides, the memo said of Hunter’s wife of 22 years. His first campaign treasurer, Bruce Young, issued an ultimatum in December 2010 after many warnings.

“Either Hunter stepped up and got Margaret in line, or Young would leave the campaign,” prosecutors reported. “According to Young, this finally got Hunter’s attention and Hunter reported back that Margaret was finally going to put her campaign credit card away.”

But she didn’t, and Hunter let the spending continue despite “dire warnings” from aides.

Meanwhile, Hunter attorney Devin Burstein called for an 11-month sentence “to be served in home detention as a condition of probation, along with 1,000 hours of community service,” citing good deeds in Congress and the military.

He attached a series of letters. Among those pleading on Hunter’s behalf are his parents, 19-year-old son, retired Navy SEAL Eddie Gallagher, a pastor, a 25-year assistant and three members of Congress.

One was Democratic Rep. Juan Vargas, a former San Diego colleague, writing to Judge Thomas Whelan as a “committed Christian and former Jesuit” who believes in mercy and redemption.

In a four-page handwritten appeal, Vargas said: “I have seen Mr. Hunter weep because of the suffering he has caused his family, and I know he feels great shame for what he has done.”

The 51st District congressman added that “while his behavior is not excused by the difficulties he suffered” in Iraq and Afghanistan, “I personally believe that Mr. Hunter would not have committed his crimes and hurt his family in such a profound way if he was not battling the demons and substance abuse addiction that followed him home.”

Rep. Adam Kinzinger, an Illinois Republican, wrote: “I believe that if Duncan Hunter is able to use his time paying back society to channel that into receiving personal help and using that to inspire others in similar positions, his payback to society would be immeasurable.

Kinzinger, a year younger than Hunter at 42 and a fellow Iraq war veteran (in the Air Force) added: “He will be able to use his experiences as both a warning and inspiration to others that would be in a similar situation, whether that is elected office or any other position. If Duncan can overcome, they can as well.”

And Rep. Martha Roby, an Alabama Republican who once sat with him on the House Armed Services Committee, hailed Hunter for “countless hours volunteering” with veterans groups such as Rivers of Recovery, United American Patriots and the Navy SEALs Fund.

War-crimes defendant Gallagher, with his wife, Andrea, said Hunter “helped countless military families like ours. Please, for his service to our country, for his long record of aiding those who needed it the most, allow Duncan to step away from the spotlight and return to his family.”

One question that remains a public mystery: Who did Hunter visit on “romantic liaisons”? (The prosecution alleged five.)

Email addresses were redacted to avoid naming the women, such as one from what prosecutors called his “new girlfriend” for a Lake Tahoe resort weekend, using a convention in Reno as cover.

That relationship began in April 2009 — only three months after taking office.

“Although they were both careful to keep this relationship secret to all but their closest friends, their relationship grew ‘serious,’ and Hunter soon began living at her house in the D.C. area,” the filing said.

Extramarital flings continued as recently as Sept. 14, 2016, when prosecutors say Hunter went out partying at a GOP event and used $32 in campaign funds to Uber back to the apartment of a woman with whom he was romantically involved.

“The next morning (at 7:40 a.m.) he texted this woman that he showed up drunk to Congressional basketball practice (which started at 7:00 a.m.) and was ‘still drinking,'” prosecutors said. “Hunter’s calendar indicated that he was scheduled to attend an 8:00 a.m. top-secret-level briefing of the Readiness Subcommittee of the House Armed Services Committee that same morning.”

In April 2010, she sent him a link to a “seemingly prescient article from the Washington Post discussing how another Representative was the subject of an FBI investigation for his misuse of $40,000 in campaign funds,” prosecutors said.

In any case, Hunter caught a break on the suggested sentence because of his Marine combat record.

“Hunter’s military service undoubtedly contributed to the disintegration of his family life and a practical estrangement from his wife,” the filing said. “In part, this may have led Hunter to support and encourage his wife’s misuse of campaign funds as a way to purchase a bit of marital peace.”

Without that recommended “4-level downward departure,” Hunter would have faced a suggested sentence of 14-24 months.

Prosecutors started with a Level 19 sentence of 30-37 months but went along with Probation Department advice to take into account Hunter’s 11 years in Congress, advocacy for military veterans and post-traumatic stress disorder from military service.

The Probation Department also cited the sentence’s impact to his family “as he is the sole financial provider and both he and his wife have been convicted of the offense.”

Prosecutors also didn’t specify a fine. But they revealed where Hunter may be making a living now.

“Hunter has been hired to work with Worldwide Aeros Corp., a manufacturer of airships based in Montebello,” prosecutors said. “Depending on his salary and future opportunities, a fine may be warranted. Without other information, the United States takes no position on whether the Court should impose a fine.” 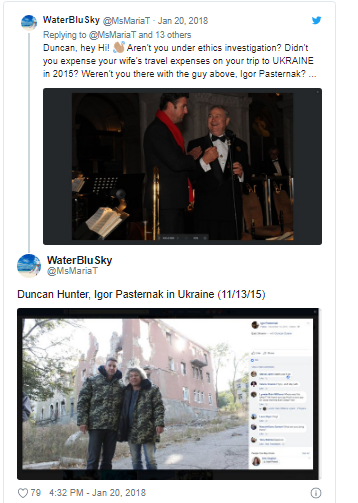 (Worldwide Aeros founder and CEO is Soviet-born Igor Pasternak, who’s made major donations to Republicans and Democrats and is pictured with Hunter several times on social media.)

The original 60-count indictment was a mere appetizer for the buffet the San Diego federal lawyers were prepared to serve at trial, with at least 215 exhibits that included text messages, receipts, photos and charts.

“Once the investigation was opened, it took months and months of work by multiple FBI agents to first compile a database able to track more than 11,000 campaign expenditures and then obtain and analyze more than 13 terabytes of data obtained through search warrants executed, among other places, on 75 different electronic devices,” said Assistant U.S. Attorney Phillip Halpern in his sentencing memo.

“It is an understatement to note that prosecuting these types of offenses is exceedingly difficult, time-consuming and resource-intensive,” he wrote Judge Whelan, expected to hand down Hunter’s penalty Tuesday in downtown federal court.

Up to the end, Hunter’s father — former Rep. Duncan Lee Hunter — found ways to defend his son. In his letter to Whelan, the elder Hunter said he found the names of “individuals” cited in his son’s indictment and matched them with the “overt acts” and discovered an “amazing thing” — 31 were registered FEC campaign contributors to Duncan’s re-election. 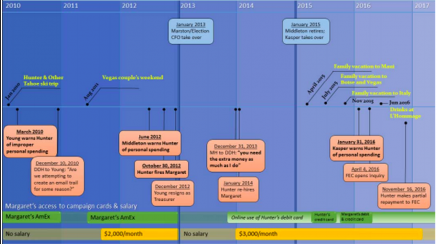 Photo, right:  Prosecutors for the U.S. government showed when Margaret Hunter was being paid by her husband. Image via legal filing

“These campaign contributor expenditures have traditionally been considered appropriately paid for with campaign dollars,” he wrote. “The expectation has been that friends contribute to campaigns and the candidate keeps the ‘team’ of friends and contributors close. Nurturing those relationships is an essential part of upcoming elections.”

“Given his admissions in the plea agreement, this memorandum will not discuss the specific allegations of misspending,” he wrote. “Although it appears the government intends to conduct a paper trial – hence, its motion to exceed the page limit – that approach serves no legitimate purpose.

“Between the indictment, pretrial motions, plea agreement, comprehensive presentence report, and objections, details of the various transactions are already before the Court. There is no reason to belabor what can be summarized in a few sentences: Congressman Hunter and his wife used campaign funds for personal expenses. That was wrong. He pleaded guilty on the national stage. He publicly apologized. He resigned from Congress. And he blames himself.”