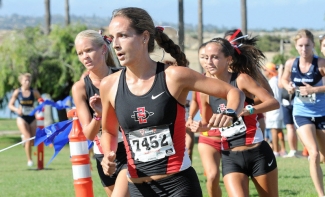 “The team worked well together,” SDSU head distance coach Robert Lusitana said. “The freshmen contributed strongly by staying in a pack alongside the seniors. It was a great start to what is going to be an exciting season. With little to no room for error, the Aztecs proved today that there isn’t always power in numbers but power in drive and teamwork.”

Senior Lily Seynaeve was SDSU's top finisher at the meet, which saw temperatures in the 80s by the time the race began at 8:45 a.m. She clocked in at 18:51.6 to take seventh among collegiate athletes. Her time was 13.2 seconds faster than her finish at the 2016 Mark Covert Classic (19:04.8).

The Scarlet and Black next competes at the UC Riverside Invitational (6K) on Sept. 16.