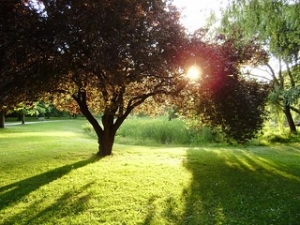 October 22, 2021 (Lemon Grove) – Lemon Grove’s City Council voted unanimously on Tuesday to join Tree City USA, a national program that has provided 3.6 million trees to  communities since its inception in 1976. Lemon Grove joins East County’s other cities (La Mesa, El Cajon and Santee) and  3,600 other communities in all 50 states.

Planting a thriving urban forest creates theses benefits for communities, according to Tree City USA, a project of the Arbor Day Foundation:

The city proclaimed its own Arbor Day on October 19 this year. Lemon Grove next needs to submit its application and plan future annual celebrations on the last Friday in April, the official Arbor Day.

In addition, the city must have a tree care ordinance, a community forestry program and an annual budget to maintain its trees (currently $3.79 million for the city’s 1,328 trees.)

Plus it must have a tree board or department, a role fulfilled by Lemon Grove’s Public Works Dept. with help from a local arborist company and landscaping firm.

The city’s Arbor Day proclamation states, “In Lemon Grove, trees are highly regarded and valued by the community and wherever they are planted are a source of joy and spiritual renewal.”

Assistant City Manager Mike James told Councilmembers that staff will pursue grants and partnerships with other organizations to grow the city’s tree inventory “smartly” with “the right type of tree in the right place.”

According to the Tree City USA website, a passion for trees remains rooted  in its member communities.

“Our story isn’t over,’ the site proclaims. “We hope to continue growing our network, city by city, until every American can live in a Tree City USA community.”

santee has been part of tree city for many years and has yearly tree planting by various groups.

was La Mesa under then-Mayor Art Madrid, who called himself a"green mayor."  El Cajon is also a Tree City, as are many other cities now across our region.