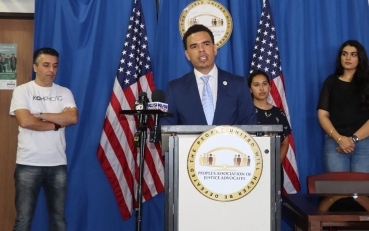 August 25, 2021 (San Diego) – Shane Harris, a national civil rights leader and president of the People’s Association of Justice Advocates, has proposed a plan for welcoming Afghan refugees to our region. Harris was joined by local Afghan leaders yesterday at a press conference urging San Diego County Supervisors to adopt the Afghan Refugee Housing Accommodation Plan for San Diego County. The proposal comes as the U.S. has evacuated some 70,000 people thus far amid the U.S. troop pullout and Taliban takeover in Afghanistan.

"This humanitarian crisis is not just a federal issue but it is a federal, state and county issue,” Harris said. “The county must act with urgency to prepare a housing accommodation plan that meets the potential influx and bandwidth of Afghan refugees arriving in town.”  He adds, “It is our duty to be there for the Afghan people like they were there for us. Our county can take these actions now to demonstrate we stand with the Afghan people and to further demonstrate we are prepared should we receive an influx of Afghan refugees".

The proposal calls on Supervisors to pass a "Welcoming to Afghan Refugees" resolution, which would activate the county's call for federal partnership on the Afghan refugee crisis to assist refugees coming to San Diego and requests county officials provide a stronger coordinated housing accommodation plan to prepare for the expected influx of Afghan refugees into the region.

This proposal comes after an analysis by PAJA working with Afghan leaders providing temporary support to refugees coming in, as well as discussions with organizations such as Jewish Family Services. The analysis found that the County hasn't taken any serious direct steps to address the expected influx of Afghan refugees, Harris says.

His plan calls on county leaders to step up and formally take a role in helping with the humanitarian crisis by providing more temporary housing units that organizations like Jewish Family Services and other county agencies can use to house more Afghan refugees quicker.

Harris, an ordained minister, also quoted the Bible, ciiting Matthew 2:1-15 which discusses “Jesus as a refugee” noting, “Jesus himself experienced what fleeing turmoil looks like, and therefore we should not turn a blind eye to our Afghan brothers and sisters.”

Mursel Sabir, a local Afghan leader,  announced a San Diego march taking place at the County Administration Center on Saturday standing in solidarity with the Afghan community of San Diego and to push for county officials to lead further humanitarian efforts. Afghan leaders who were in attendance also have had family arrive over the course of the last few days from Afghanistan.